For the first time this season, World Cup leader Rebecca McConnell (Primaflora Mondraker Genuins) was beaten in a World Cup XCO, with Loana Lecomte (Canyon CLLCTV), the defending World Cup champion, repeating as winner in the fourth round at Leogang, Austria. Jenny Rissveds (Team 31 Ibis) unsuccessfully tried to stay with Lecomte, but did hold on for second ahead of Laura Stigger (Specialized Factory). McConnell continues to hold onto the leader's jersey despite finishing seventh. 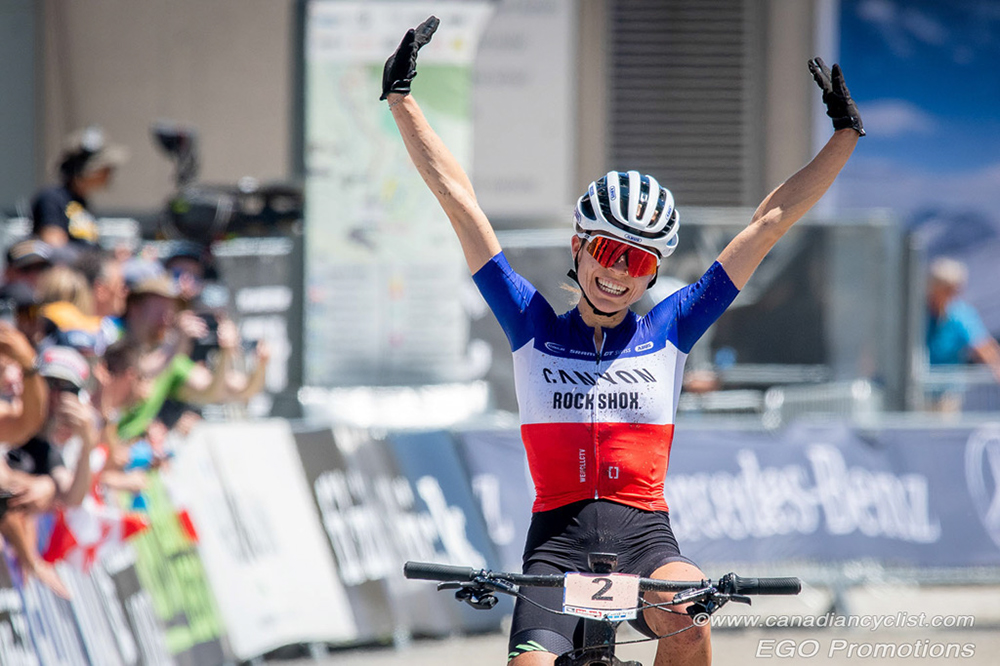 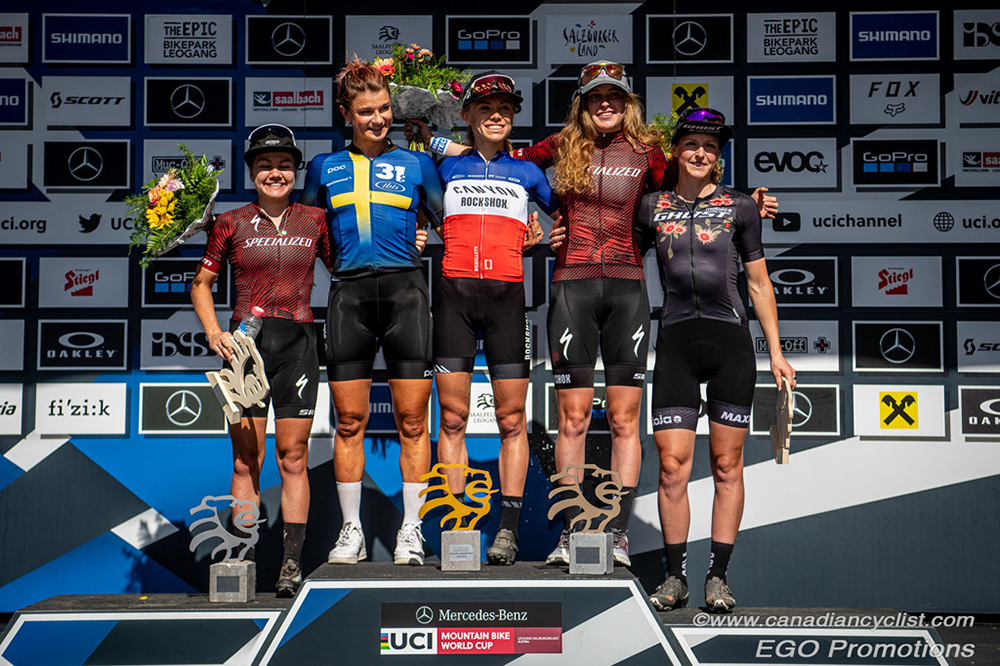 Canadian champion and top ranked World Cup rider Jenn Jackson (Canyon MTB) did not start after reportedly crashing in training and suffering injury. Emily Batty (Canyon MTB), despite getting caught in a crash 200 metres into the race, was the top Canadian finisher in 25th place, her best World Cup result of the season. Sandra Walter (Liv Collective) was the only other Canadian in the race, finishing 30th. 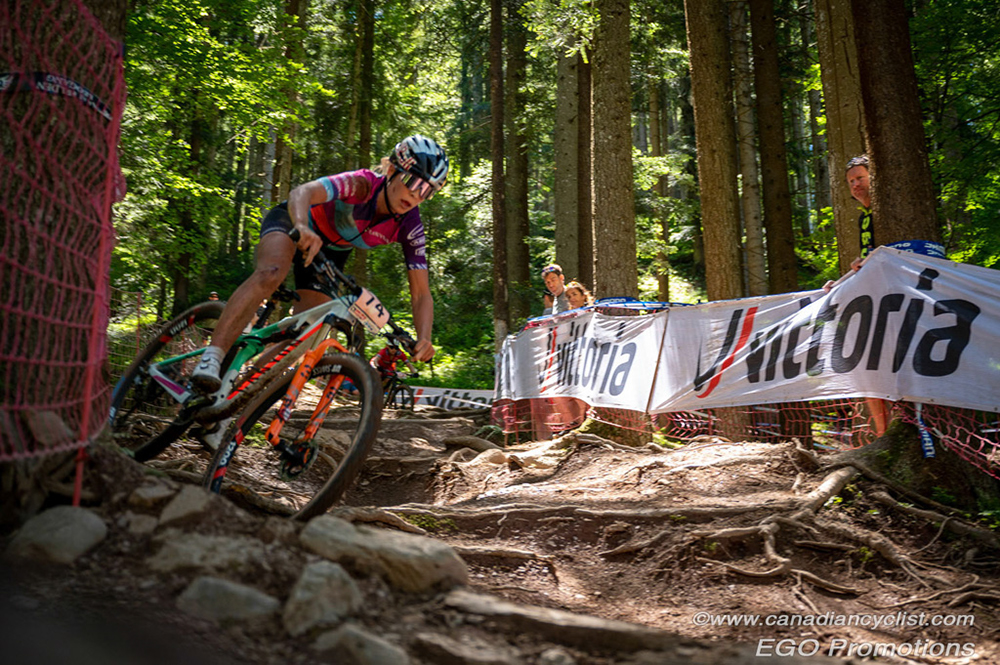 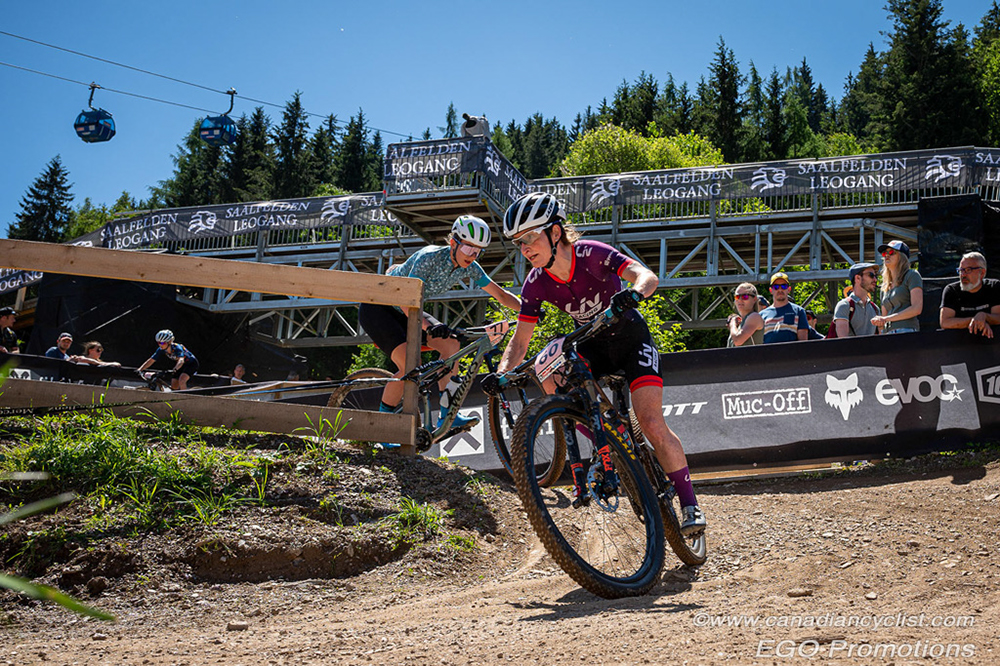 Walter, who finished 36th in the XCC on Friday, telling us she did not have great legs, was much happier with her XCO ride. "I'm happy that my legs cooperated today and I managed the heat well to bag another top-30!"

After rain and mud all week, race day was sunny and hot, with the track drying out almost completely. The Leogang circuit is all about climbing, with two major ascents per lap, and Lecomte is acknowledged as one of the best climbers on the World Cup circuit. She showed this to the rest of field on Friday when she rode away on a shorter version of the first climb in the Short Track to win, and even more climbing for the XCO was definitely in her favour.

The women raced a start loop plus five laps, and by the end of the start loop the lead was down to four riders - Lecomte, Rissveds, McConnell and Olympic champion Jolanda Neff (Trek Factory). However, once they started the first big climb, Lecomte went to the front and that was it. Neff was popped almost immediately, with McConnell gone not too much later. Rissveds - who finished second to Lecomte last year - managed to follow the French champion for the first lap, but was dropped early in the second. From that point on, it was just a matter of determining how much Lecomte would win by.

"I'm just very happy for this weekend," commented Lecomte. "I wanted to win one World Cup this season, and I can't imagine a better weekend than this one. The overall [World Cup title] is not my goal this year, it is the European and world championships [to be held in France], so I will skip some of the [upcoming] World Cups. So I am happy to reach my goal of a [World Cup] win."

One other ride of note was by another Austrian favourite, Mona Mitterwallner (Cannondale Factory). Last year's Under-23 World Cup champion - riding up a category - is a very strong climber and expected to challenge Lecomte, but was taken down in a crash in the first 200 metres of the race. She had to run to the tech zone and get her bike fixed, entering the first lap in last place by a two minute margin from the leaders. She roared up through the field to eventually finish 15th, leading to 'what might have been' speculation.

Despite finishing seventh, McConnell continues to hold a healthy lead in the overall standings with 1093 points, 177 ahead of Lecomte, who moved into second after winning the Short Track. Terpstra remains in third, a further 203 points back. Jackson remains the top Canadian in the rankings, but drops from 24th to 27th. Walter moves up one spot to 35th and Batty jumps from 53rd to 43rd.