Round 4 of the XCO World Cup in Leogang, Austria, came down to two-way battle between Swiss rivals Mathias Flueckiger (Thomus Maxon) and world champion Nino Schurter (Scott SRAM), with Flueckiger adding a second win for the weekend to the Short Track he won on Friday. South African champion Alan Hatherly (Cannondale Factory) finished third for the best World Cup XCO result of his career. Schurter continues to lead the overall standings, but Flueckiger, the defending World Cup champion, moved up to seventh from third. 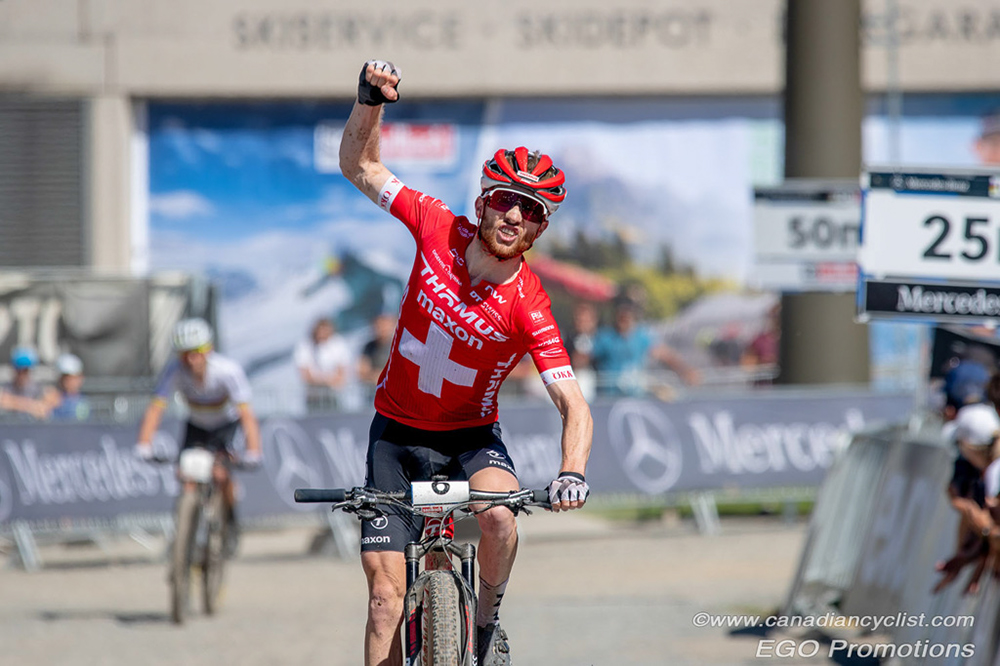 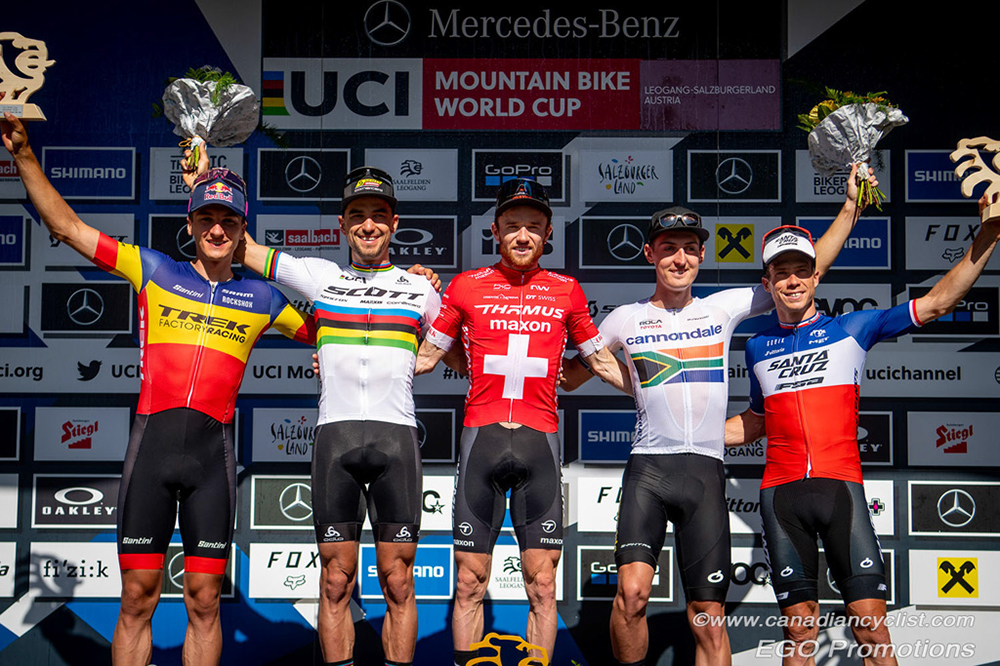 Peter Disera (Norco Factory) was the top Canadian, finishing 41st after a slower start that saw him 67th after the start loop. His second and fifth laps proved to be the strongest, moving him up in the field. Sean Fincham (Norco Factory) finished 55th after riding 47th for much of the race, before fading slightly in the final two laps. Tyler Orschel had a strong start, as high as the top-30 in the start loop, before sliding back to finish 59th. Malcolm Barton finished two laps down in 77th place. 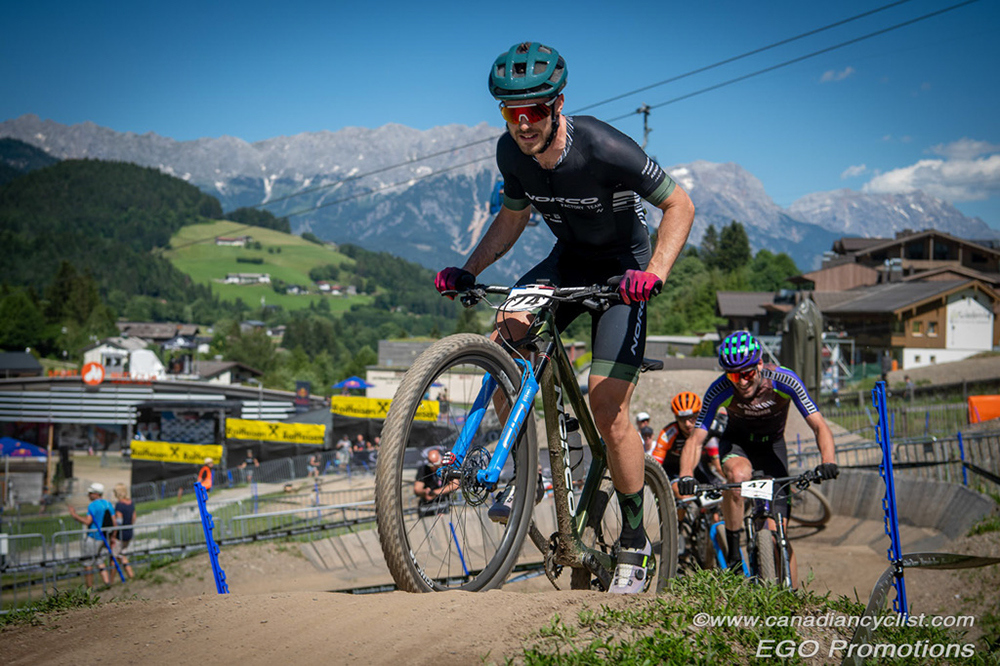 "I had a bit of a slow start," explained Disera. "A rider in front of me broke his chain and another one missed his pedal, and then another one hit a fence ... so that whole preferable right side at the start just got ruined. So up that first climb I had already slipped 20, 30 spots instantly. It was frustrating, but I rallied up and in the first six or seven minutes things started to come around. In the middle part of the race I was moving up pretty good and then managed to get around a big group with Ty [Orschel] and Sean [Fincham] all at once. I'm pleased with this one; if it hadn't been for that start..."

"My goal this year is to get back into the top-30 consistently. It's been a slow start to the season and I'm just trying to get my head in order and my legs back under me. It's a bit of different game starting back in the 70s, so I'm being patient and accumulating points where I can."

After rain and mud all week, race day was sunny and hot, with the track drying out almost completely. The Leogang circuit is all about climbing, with two major ascents per lap totaling 210 metres of elevation gain each time. The men raced a start loop plus six laps.

Schurter went to the front on the first climb of the opening lap, and Carod, Sarrou and Avancini were quickly shed, while Flueckiger moved up to join the leaders. The five leaders began the second lap together, but the pace Schurter continued to set saw Cooper yo-yoing off the back. He and Maxime Marrotte (Santa Cruz) managed to rejoin the leaders briefly before getting dropped for good before the start of the third lap.

Lap 3 was where the final selection took place, with Flueckiger attacking hard on the first climb from fourth place. He blew by the three in front of him, with only Schurter able to latch onto his wheel. Dascalu and Hatherly both struggled to rejoin the leaders, with the South African managing a couple of times in the next few laps to briefly catch on, only to get immediately dropped whenever either of the Swiss riders surged.

The two leaders rode together until the final climb on the last lap, when Flueckiger put in another strong attack. He could only gain a few seconds, but it proved to be enough for the Swiss champion to win the fifth XCO World Cup of his career. Hatherly managed to hold off Dascalu by six seconds to take third.

"I'm exhausted, but it's great to win," said Flueckiger. "After Friday's win and today ... I know I'm in good shape, but today was tough. It was a great battle once again with Nino. This time it was a bit better for me and I'm happy about that. It's a really demanding course here with so much climbing, and you never have the chance to recover. From outside it may have looked tactical, but it was more or less full gas."

Schurter agreed with his rival, "it was a tough race; this isn't my favourite track. It was a tough battle with Mathias, he pushed hard, especially when he attacked and we got away. That was a hard attack and it took a while to recover. It was a nice battle and I'm super happy about my second place on a track that doesn't suit me so well."

Schurter remains the overall leader for the Series, with 964 points after four events, 189 points ahead of Dascalu, who moves up to second from third. Flueckiger, after winning both the Short Track and XCO on the weekend, jumps from seventh to third, 64 points behind Dascalu. Gunnar Holmgren (Pivot Cycles - OTE) remains the top Canadian in 46th (down from 41st), despite not racing. Peter Disera remains in 49th place.