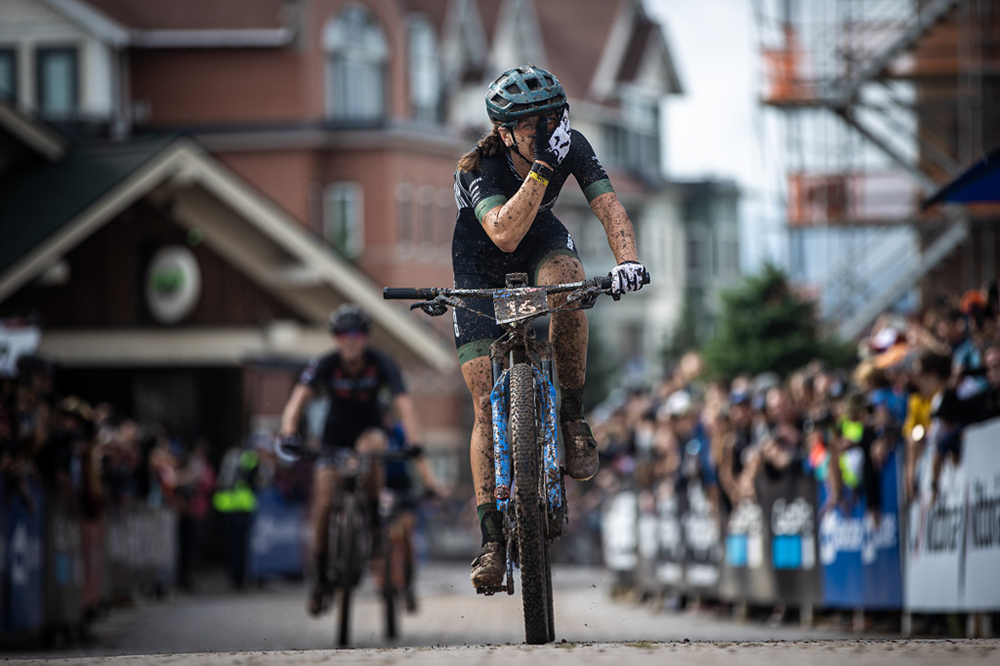 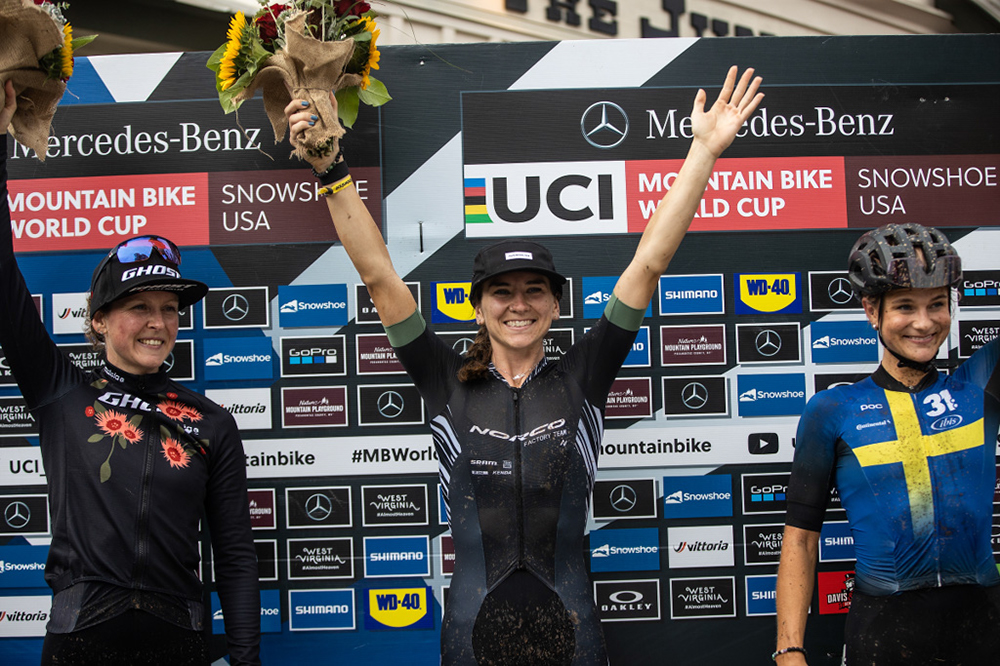 The race only had 31 entries (out of a possible 40), with top contenders Loana Lecomte (Canyon CLLCTV), Pauline Ferrand Prevot (BMC) and Linda Indergand (Liv Factory Racing) all electing to skip the race. The six lap race was very muddy and slippery after rain in the week leading up to racing.

Jenny Rissveds (Team 31 Ibis) got the holeshot, with McConnell and Terpstra right behind her. By the end of the first lap, the race was down to five - Rissveds, McConnell, Terpstra, Jolanda Neff (Trek Factory) and Keller. McConnell crashed hard on Lap 2, putting her out of contention (eventually finishing 18th), while Rissveds kept the pace high at the front, discouraging breakaways.

By the start of the fifth lap, Rissveds had a gap, with Terpstra and Keller chasing. Terpstra began steadily reeling her in on the last lap, catching her, but Gibson was having an incredible second half to her race, catching both Rissveds and Terpstra in the final 500 metres to take her first World Cup win.

"It hasn't even sunk in yet," said Gibson, "even as i was crossing the finish line, I was thinking, 'is this really happening?'. It's something I have pictured in my head hundreds of times. I didn't think it would happen in my first year of Elite, and definitely not this weekend, but you always think, 'maybe'. I just can't believe it."

Keller moves 80 points ahead of McConnell in the XCC standings, while McConnell continues to lead the XCO standings, with a 72 point lead over Terpstra. 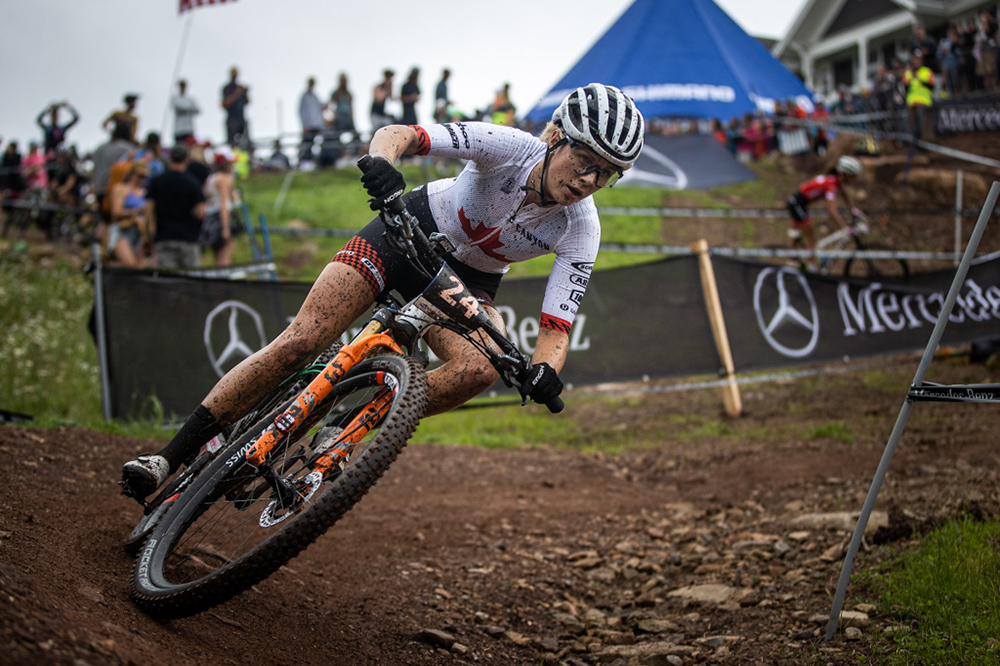 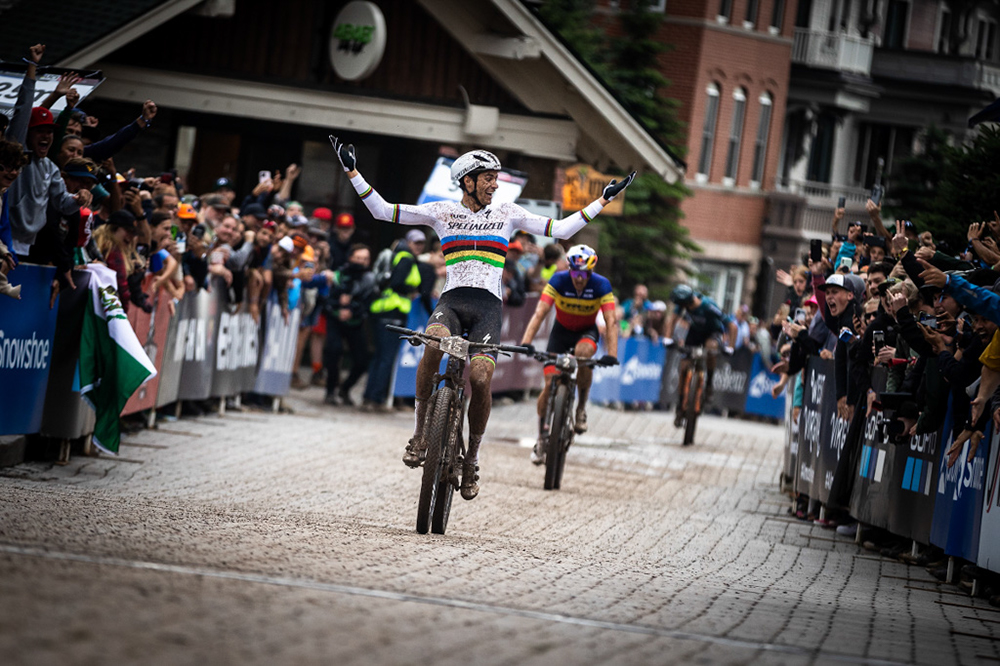 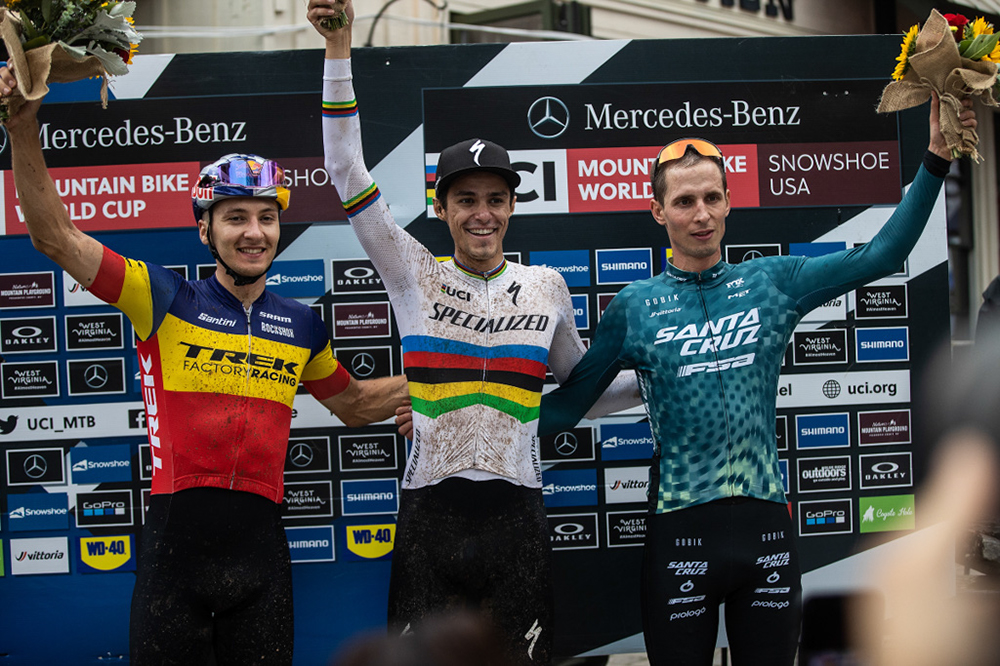 Rain through the week leading up to the race made for a muddy and slippery course. Despite a fast pace set by Vlad Dascalu (Trek Factory), there was still a sizeable group at the front of the race by Lap 3 (of seven). Blevins tested the waters at the front on Lap 4, but dropped back as others pushed the pace and began to crash in the slippery conditions. By the start of the final lap, the lead group was down to four - Blevins, Dascalu, Luca Braidot (Santa Cruz FSA) and Sebastian Carstensen (KMC-Orbea). Dascalu attacked on the first climb, opening a small gap, while Blevins started to pick off the riders in front of him, catching and passing a slowing Dascalu in the final 100 metres. Hatherly finished sixth, enough to put him in the leader's jersey.

"I thought it couldn't get better [than winning the rainbow jersey]," said Blevins, "but it's just amazing to be here with all these people. This is special. It was kind of like Worlds, where I hung back with a bit of a gap and kept patient; I knew that you could gain a lot of ground on the last climb and get up to his [Dascalu] wheel and draft him into the sprint. I don't get to hang out with the U.S. mountain bike scene too much because we are always in Europe, so that's what makes this so special."

Hatherly now leads Flueckiger by 14 points in the XCC standings. There was no change to the XCO standings, with world champion Nino Schurter (Scott SRAM) still leading Dascalu by 195 points.