Day 3 of track cycling at the Commonwealth Games saw Canada win a third silver medal, once again by Kelsey Mitchell. She previously won silver medals in the Team Sprint and the Sprint. This time it was in the 500 metre time trial, an event that Mitchell has never competed in at a track competition. In another strong Canadian result, Maggie Coles-Lyster finished just off the podium, taking fourth in the Points Race.

Women's 500m TT
Mitchell told us yesterday in our interview after her silver medal performance in the Sprint, that she would compete in the 500m TT as a learning experience. She had done some TTs in training but never in an actual competition setting, so didn't know what to expect. Fourth to start, she immediately set the time to beat - breaking the Commonwealth Games record with a time of 33.294 seconds. As rider after rider competed, no one could break the time; a few set intermediate first lap splits that were faster, but invariably slowed on the second lap. The final starter, Kristina Clonan of Australia, was over a tenth faster after the first lap, but started to lose time on the second. The entire Canadian squad was watching in the pits as Clonan came across the finish line - 0.060 seconds faster. Other Canadian results were Sarah Orban in 14th and Devaney Collier in 17th. 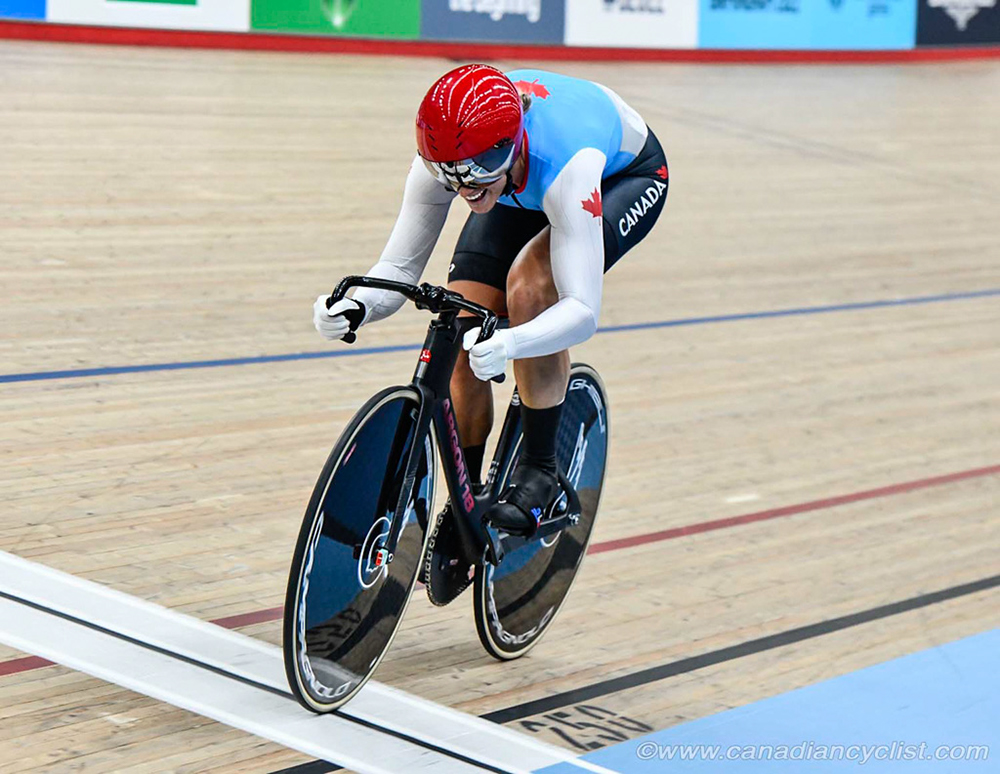 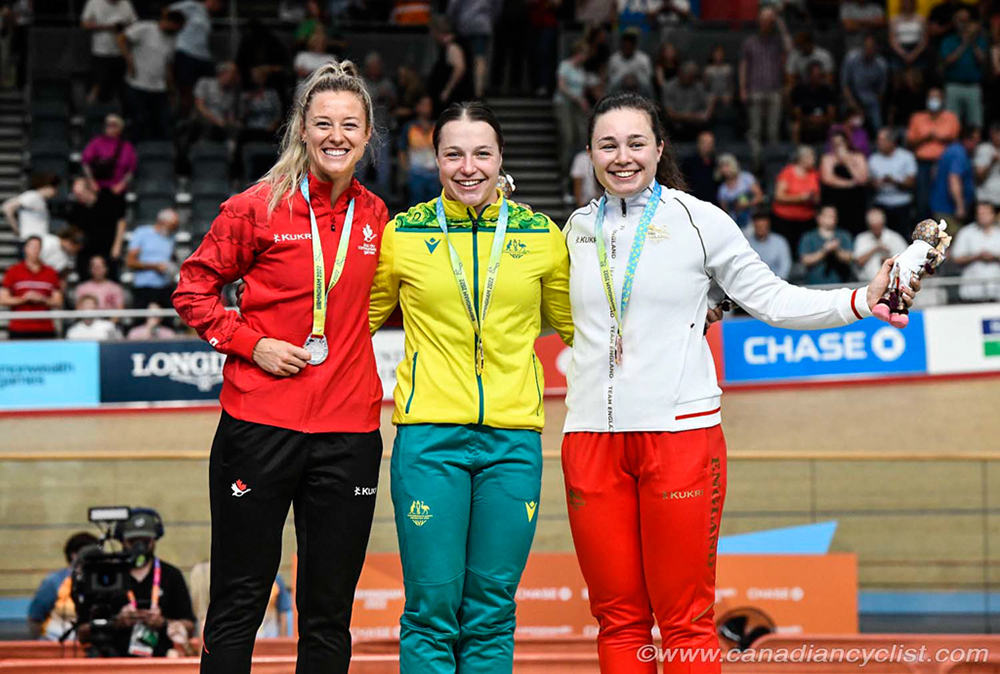 "Three silvers now," agreed Mitchell, "but I'm happy about it. I went out there and gave it my absolute best and it was good enough for a silver. I'm proud of my self; it's a personal best for me. There's obviously pressure, but I had no idea what I could do. We tossed on a gear different from what I would normally ride and just went out there to see what would happen. I was really happy with my first lap, that's a personal best. I was able to hold on with the second lap to get that silver."

"I knew she [Clonan] would have a strong start, but I didn't know if she would hold on ... but she did, which is awesome for her. It was very stressful being one of the first ones to go and watching all the way to the end. When the last few were going, I knew I would be on the podium but didn't know what colour the medal would be. So, I'm happy with today and excited for tomorrow, with the Keirin."

Women's Points Race
The Points Race at the Commonwealth Games is a little bit different, with countries able to have multiple riders in the race - Canada, Australia and New Zealand all had three riders. This opened the door for some team work, which isn't supposed to happen in this race, but there were clearly some instances.

Coles-Lyster was part of a group that took a lap, sitting as high as second, but she missed another group that snuck away in the second half of the race, and that stayed away to take the remainder of the points.

"Yes, so close," said Coles-Lyster. "Fourth is that evil place where you are right there, and you just go through all the things you could have done in the race. But Commonwealth Games is so different with teams out there; it is just such a different style of racing from everything else we do throughout the year. I gave it my all to for that [second] lap half way which definitely cost me some matches. But I'm proud of my effort and there is still the Scratch Race tomorrow."

Men's Sprint
Canada had three riders in the sprint, with all three qualifying in the top 16, and setting times below 10 seconds for the flying 200 metre. Nick Wammes was eighth, Ryan Dodyk right behind him and Tyler Rorke in 11th. Only Dodyk made it past the 1/8 final, by beating team mate Wammes in a nail biter ride. Unfortunately, Dodyk then matched up in the quarter finals with Nicholas Paul (Trinidad & Tobago), winner of the Keirin the night before, and fastest qualifier, setting a Games record. He tried a variety of techniques to overcome Paul, but the other rider was just faster. 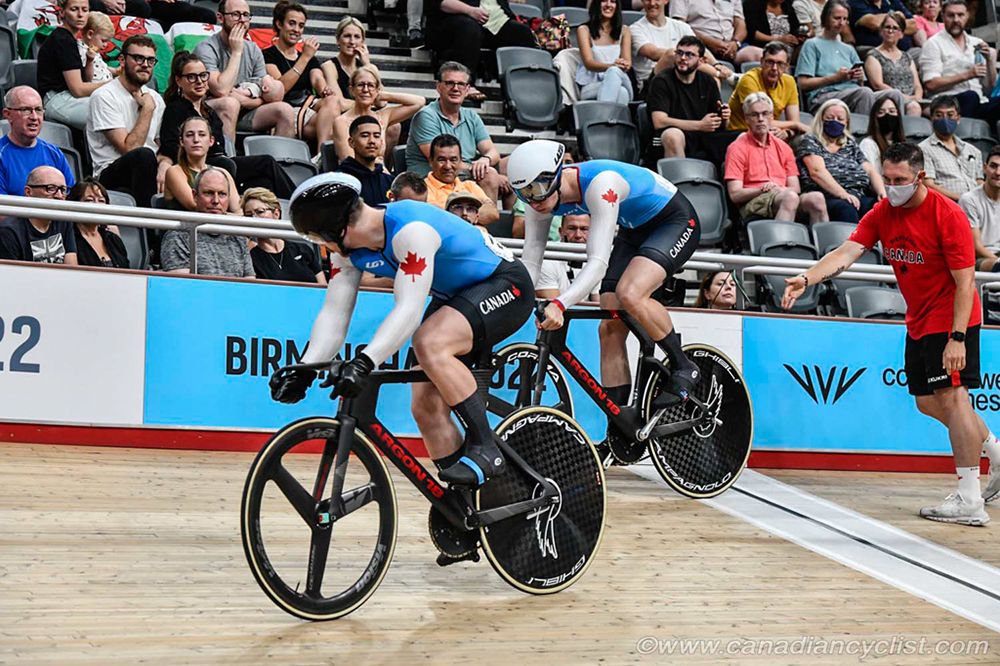 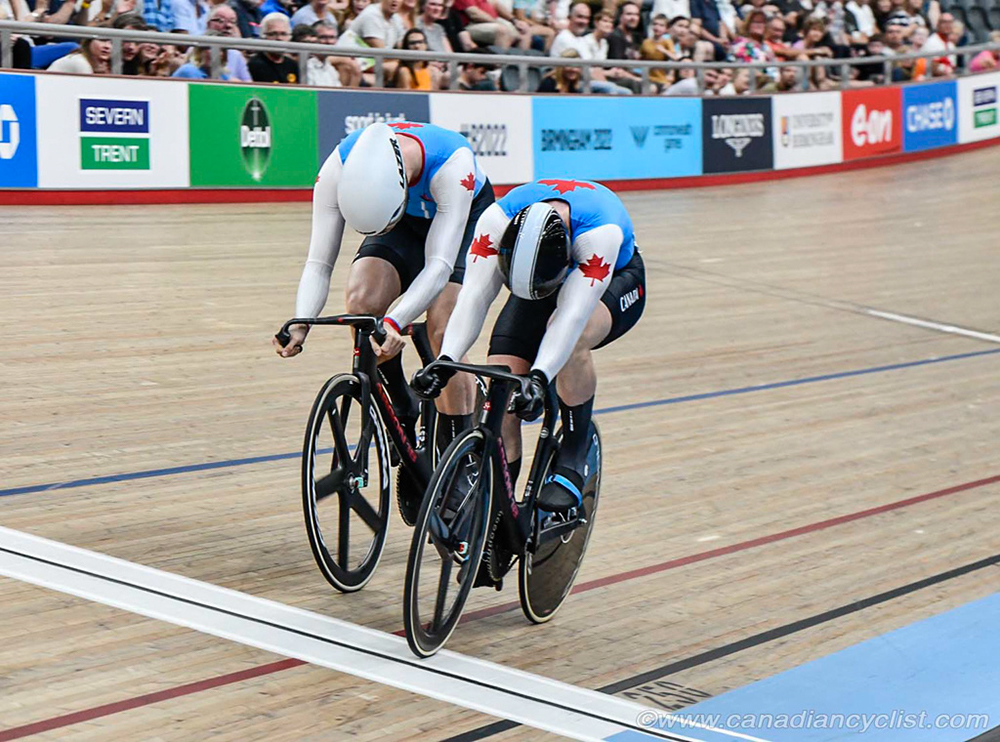 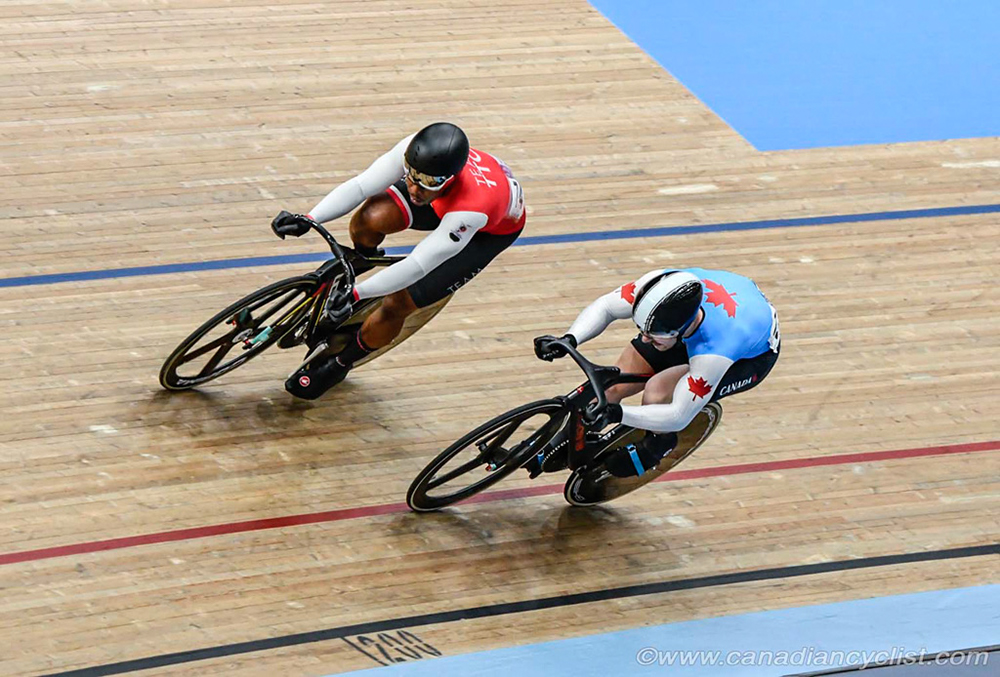 "I was one for two against people named Nick," pointed out Dodyk. "It was not quite the qualification I was hoping for; I was hoping for a 9.8, but then having to race Nick [Wammes] ... it happens and I just had to do my best race, regardless. I know both of our strengths and weaknesses, so I knew that my jump is a little bit stronger than Nicks, so as long as I could get into the right cadence, I should be able to out jump him a bit."

"Going up against [Paul], I was pretty sure my run was over. But I just went out to have a good time and maybe pull off some move that would surprise him."

Men's Scratch Race
Canada had a very tough time with the Scratch Race. Michael Foley qualified for the final in the morning, in one of two half distance races. However, in the other one, Derek Gee was caught in a massive crash at the start of the final lap that took down half the field going through Turn 1. Gee came into the last lap at the back of the field behind the crash. He tried to go high over it, actually riding the wall at the top of the track for a short period before getting tangled in the railing and crashing down the track. Unfortunately, it appears are more minor than first thought:  no broken bones, a few stitches in his neck and some damage to his right bicep. Mathias Guillemette missed the crash, but was disqualified; charged with causing the crash after he dropped onto the apron and then moved back up. Foley was 12th in the Final.