Olympic champion Jolanda Neff (Trek Factory) took her first XCO World Cup win since 2018 on Sunday at Mont-Ste-Anne, Canada, joining legends Juli Furtado of the USA and Catharine Pendrel of Canada as the only riders to have won four times on this oldest race on the World Cup circuit. Mona Mitterwallner (Cannondale Factory) came back from a crash to outsprint Haley Batten (Specialized Factory) for third. Despite finishing seventh, Anne Terpstra (Ghost Factory) managed to hold onto the leader's jersey with one round to go. 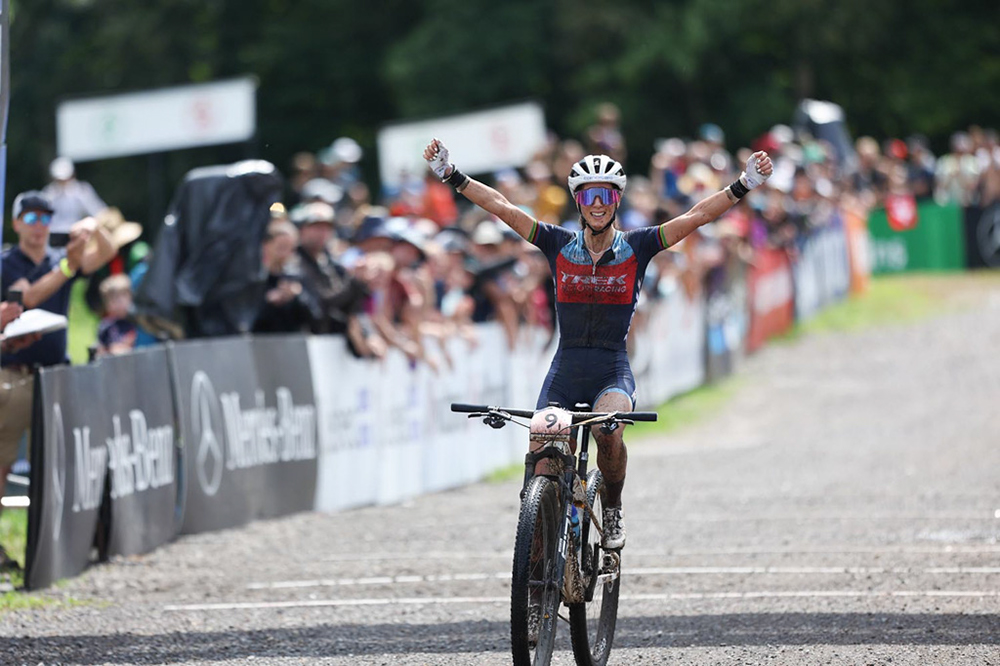 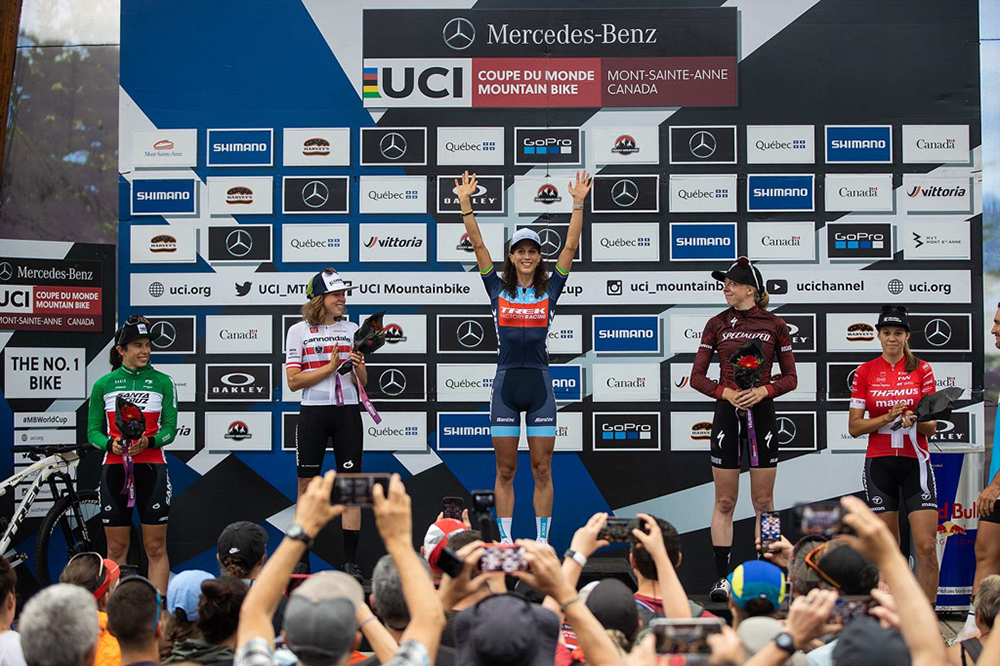 Sandra Walter (Liv Collective) was the best placed Canadian, finishing a strong 13th after moving up from the low 20s. Emily Batty's (Canyon MTB) bad luck for the weekend continued - after crashing in the XCC on Friday, she crashed again in the first 10 metres of the XCO, restarting in last place. After a slow start in the start loops, she began picking up her pace, steadily catching people to finish an impressive 18th. 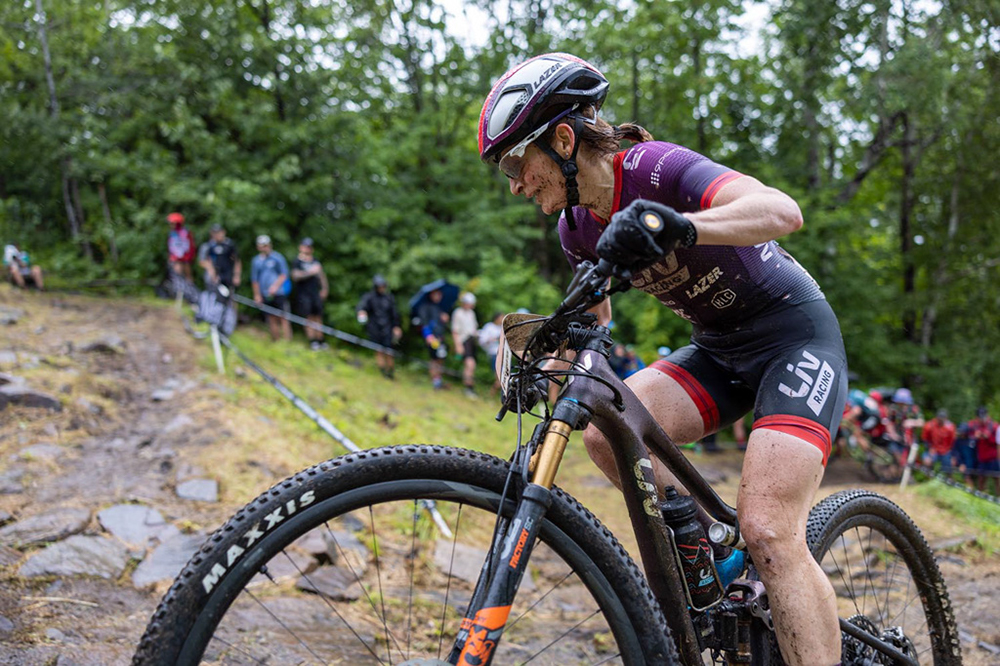 "Today I tied my best World Cup result ever," said Walter, "which was in 2014, also here at Mont-Ste-Anne. So there's definitely something about this place! Even before the race started it was super hot, and I felt ... not ready at the beginning of the race. I was struggling with the heat and it was hard to stay focussed, but the second it started to rain, there was a switch that flipped and all of a sudden I felt better and more engaged in the race. I steadily made up spots and really had a lot of fun, and the crazier it got, the more fun it got. By the end, I was in 13th, and I saw 12th place ahead of me just before the finish, but there wasn't enough time left to catch her. I'm really excited about this result, and it's definitely good motivation going into the end of the season and world championships. It was a really good day, and I loved all the fans out there cheering me ... it makes such a difference to hear your name; it really meant a lot."

Mont-Ste-Anne has been part of the World Cup circuit since it began in 1991, as well as hosting three world championships. It is considered a monument of the sport, one of the only remaining classic natural courses, with roots, rocks, steep climbs and technical descents. This was only made more difficult when torrential rain swept through for 30 minutes in the middle of the race, making descents especially treacherous.

One rider who seems to revel in harsh conditions is Neff, who started the weekend by winning the XCC on Friday night. Through the opening two start loops and the first lap, she was content to follow as former World Cup leader Rebecca McConnell (Primaflora Mondraker Genuins) set a hard pace, opening a small gap on the start loops, which she held through the first full lap. Terpstra, Batten, XCC World Cup leader Alessandra Keller (Thomus Maxon), Neff and Italian champion Martina Berta (Santa Cruz FSA) all caught up to the Australian on the main climb of Lap 2; the steep, rocky switchback climb called 'La Marmotte'. McConnell faded through the remainder of the race to finish a distant 19th.

Neff then pulled away on La Marmotte, gapping Terpstra, Keller, Batten and Berta, and then really starting to opening some space as the rain began, starting the third lap over 30 seconds up. Keller was dropped after crashing, to eventually finish fifth, and then Berta, who rode consistently in fourth, leaving Batten and Terpstra at the front. The duo continued to lose time on Neff, who was the only rider to consistently ride every technical section, eventually opening a lead of over a minute before slowing for the final lap. Then Terpstra began to fade from her efforts, leaving Batten alone in second. However, Mitterwallner, the Under-23 world champion, riding up a category in Elite, began reeling the American in. Mitterwallner, one of the best climbers on the circuit, had crashed heavily on the third lap, dropping to seventh, but once she got going, was able to join Batten in the final half lap. This set the stage for a sprint up the final steep climb, with Batten leading to the final flat 70 metres, before Mitterwallner sprinted around her at the finish line. 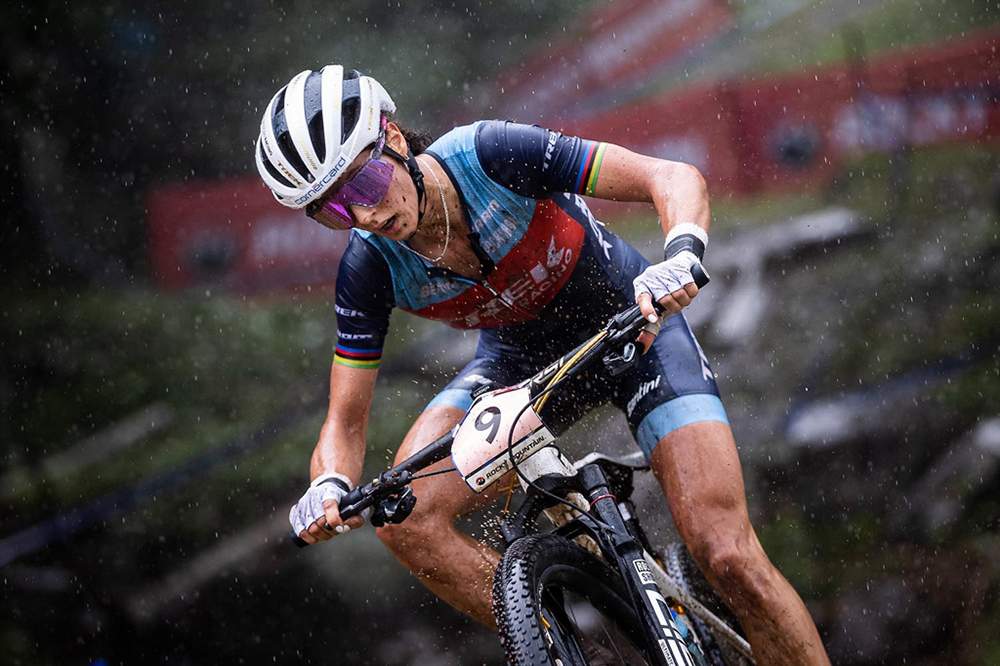 "It's been almost four years to the day," agreed Neff, "so it's incredible, it's unreal to win. I knew that on this course there are some many sections where I can take a millimetre of an advantage, because everything is so technical. So I knew that if I was on my own, I could take the most advantage of the track. I had so much fun today, I enjoyed myself so much on the bike. It got really slippery at one point in the rain - it was insane, I think even more rain than at Snowshow [last weekend]. That changed everything, but I kept going, it was so much fun."

Terpstra continues to lead the overall standings, extending her lead slightly over McConnell to 64 points, with Keller remaining in third, a further 24 points back. Mitterwallner jumped up to fourth from sixth. This Series title will come down to the final round in Val di Sole, Italy, at the beginning of September.