Starting on Tuesday [September 13th], cycling across Canada from Vancouver to to his home town of Alma, Quebec, for the benefit of the Suicide Prevention Center 02, Bouchard has raised more than $2,000 so far, in addition to raising public awareness for a cause that is dear to him. Most of his competitors take a rest at the end of the mountain biking season. Bouchard, on the other hand, began a journey of approximately 5200 kilometres as a "reward". He expects to arrive safely in mid-October.

By partnering with the Saguenay-Lac-Saint-Jean/Chibougamau-Chapais Suicide Prevention Center, the 29-year-old athlete has additional motivation for this cause, which has hit him hard in the past. His sister took her own life in 2009, then his mother took action the following year.

"I'm talking about it publicly for the first time and it's difficult, but I felt it gave meaning to my actions. It gives me a reason for every pedal stroke and when it gets tough, I'll know I'm doing it for other people," he told Sportcom earlier this week, before boarding his flight to Vancouver. The idea was welcomed with open arms by the Center for Suicide Prevention 02 team. Not only have donations multiplied since the announcement of the project, the information disseminated about the help and services offered at the Center increases visibility of the organization.

"Léandre contacted us by telephone to explain to us what he had in mind and we quickly found him very humble [in his approach]. For us, it's always a great pleasure to see that people are sensitive to this and want to help," said Claudia Tremblay, the Centre's communications supervisor.

"I expect long days and moments of fatigue. Above all, I can't wait to see how my body will react after more than a week," said Bouchard. Sharing the road with a road crew could have lightened the task and served as motivation. Those approached, however, declined the offer, preferring to rest after a full World Cup season. Now with a bachelor's degree in teaching physical education, Léandre Bouchard saw it as an opportunity to fill his Fall schedule.

"Not everyone has crazy ideas like me! Looks like I'm the only one crazy enough for that! Many have no more energy, but I find it energizing. I see it as a reward, but we don't all have the same interests."

The cyclist, however, can be accompanied remotely, via social media, where he regularly provides updates. He also takes the opportunity to "turn towards suicide prevention", an issue that remains at the heart of his challenge.

"From the start, Léandre stressed to us that it was important for him to deliver the right message and to address both people who have suicidal thoughts and those who are bereaved, or who are worried about their loved ones," said Claudia Tremblay. "It has good visibility, we see a certain enthusiasm and this week, it's quite impressive!"

The Suicide Prevention Center 02 and Léandre Bouchard therefore invite people to support the cause in one of the following ways:

• Make a donation to the Suicide Prevention Center 02 using the following link: www.zeffy.com

• Talk about the suicide prevention resources available to those around you

In Quebec, if you are worried about yourself or a loved one, a person bereaved by suicide or need information on suicide prevention, contact the line provincial telephone intervention: 1-866-APPELLE or the intervention line provincial digital (chat and text): SUICIDE.CA 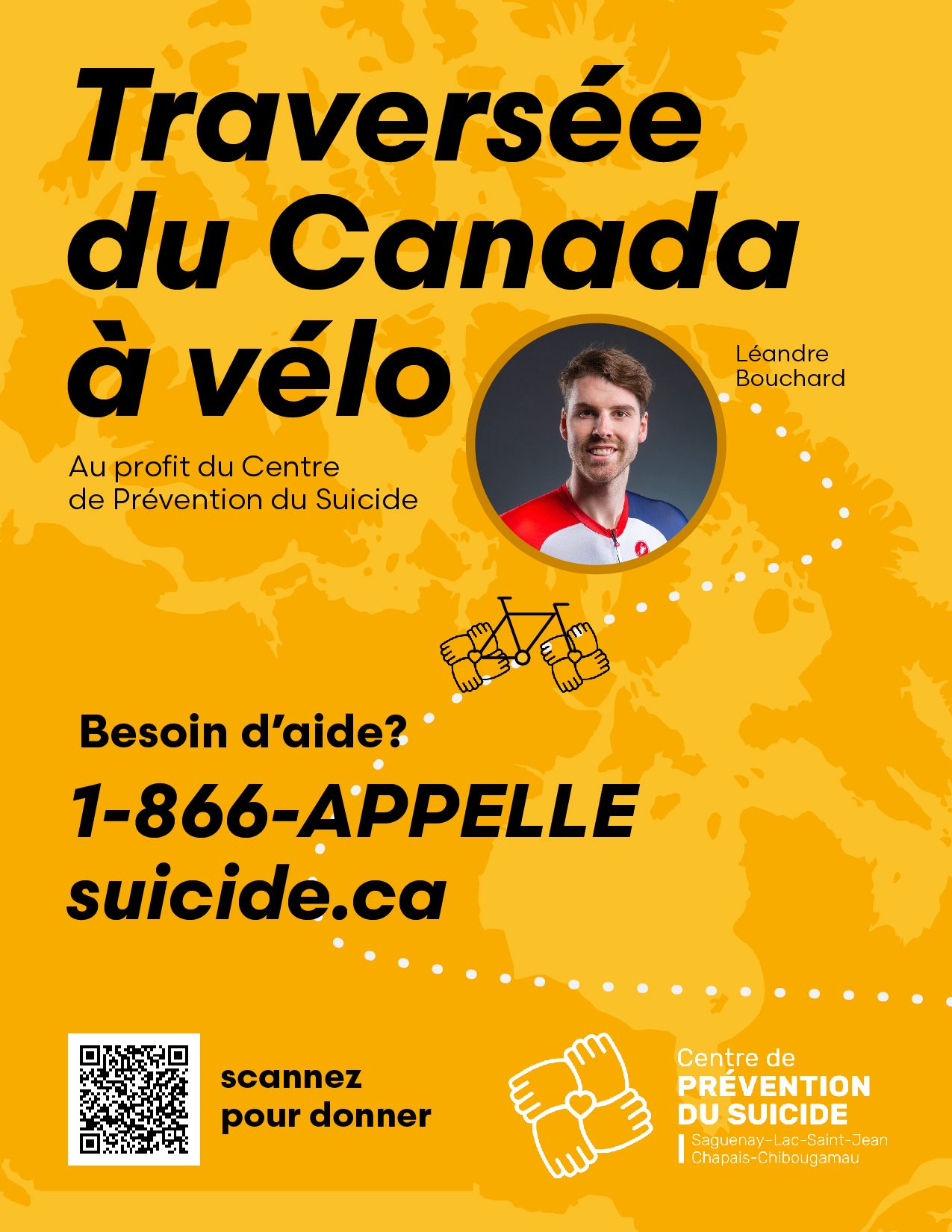