Canadian Under-23 women's road champion Simone Boilard came close to getting on the second podium of her career at the Road Worlds on Saturday in Wollongong, Australia, finishing fourth in her category in the road race. Boilard won the bronze medal in the Junior road race at the 2018 Worlds. This is the first year that an Under-23 title has been awarded for the women, however, they did not have a separate event and raced with the Elite women over 163 kilometres. Boilard finished 22nd overall, in the second bunch, along with Alison Jackson, the best Canadian finisher in 18th place in the same group (but Elite). 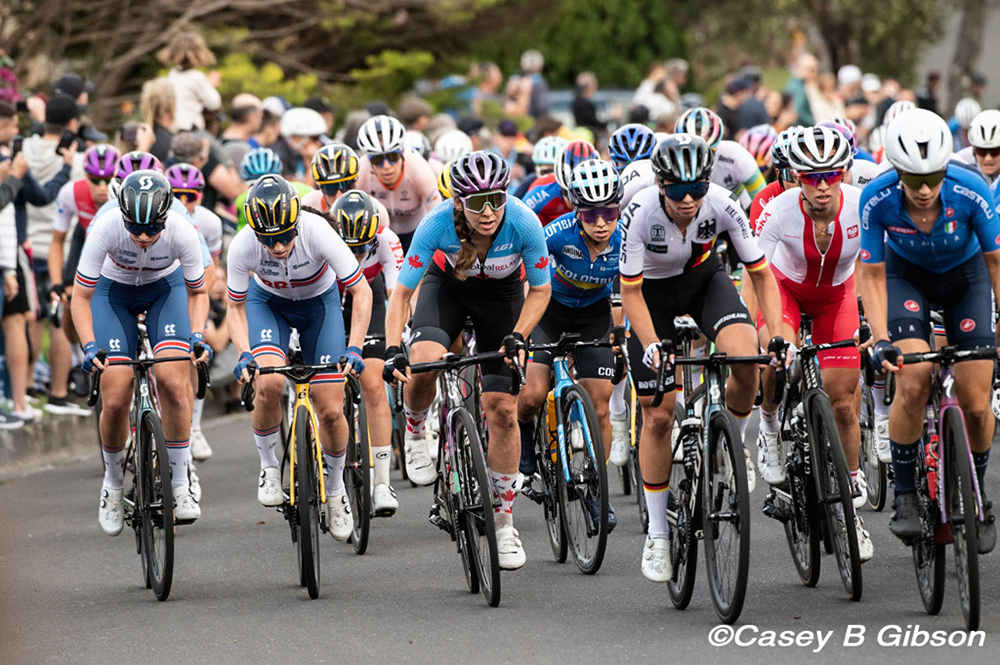 "It's not the best race format," commented Boilard to Sportcom, "but the best way to play it was to think about doing the elite race as best you can and then seeing the situation on the last lap. It's weird, because it's a bit of a race within a race. I hope that in the next few years they will make a real format with a real race. It will be better for everyone."

"It was a really tough race on all levels, both the course and the distance. I had ambitions for the U23 title, but unfortunately I just missed it on the line. I really gave it my all and couldn't have done more."

Boilard finished in the same time as the silver and bronze medalists in her category, Great Britain's Pfeiffer Georgi and Germany's Ricarda Bauernfeind. New Zealand's Niamh Fisher-Black finished with the lead group and won the Under-23 title.

"I try to put things into perspective by telling myself that I can be happy with my race," continued Boilard, recalling that she arrived in Australia only on Thursday morning due to delays in obtaining her visa. "It was a lot of stress and I hadn't slept or ridden much. It wasn't the ideal preparation, but I can be super happy with the way we rode. [...] I am satisfied, but it is also bittersweet. But hey, it's done now."

Simone Boilard may participate in one last race this season. She will be back in the St-Michel - Auber93 team next year to continue her progress at her own pace, alternating between World Tour races and those on the French circuit.

Annemieck van Vleuten (Netherlands) continued her dream year, attacking out of the front group with less than a kilometre to go and catching all the other favourites by surprise. Despite a fractured elbow that occurred a few days earlier in the mixed team time trial, van Vleuten won solo, a second ahead of Belgian Lotte Kopecky. Bronze went to Italian Silvia Persico. Van Vleuten, who will celebrate her 40th birthday in two weeks continues her dream season, she who won the Tour de France Femme, the Giro d'Italia Donne and the Challenge Vuelta.

Other Canadian results include Olivia Baril in 37th place, in the third group, while Magdeleine Vallières-Mill, from Sherbrooke, did not reach the finish. The race marked the retirement of Manitoba's Leah Kirchmann, 46th, after a ten-year professional career.