Despite the heat of the midday sun, the pack took off at a very fast pace for the day’s 146km ride all the way to Al Bustan village in the heart of old Muscat. That however didn’t prevent two riders from taking off from the pack at km 4: Bobby Traksel (CSS), already present in yesterday’s breakaway and Tomohiro Kinoshita (JPN). 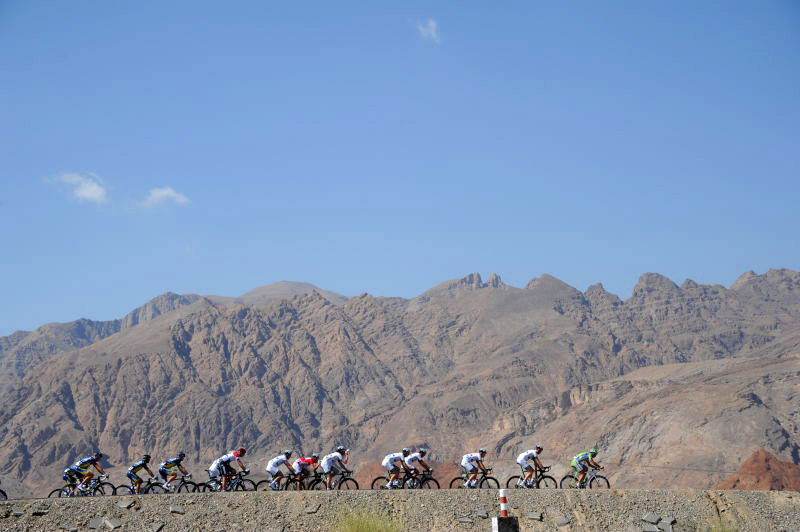 The front men’s lead went from 55s at km 6 to a maximum 5:40 at km 27. At the first intermediate sprint (km 32), won by Traksel in front of Kinoshita, the pack led by Kittel (ARG), hungry to capture a point in the sprinters’ standings, remained 5’20 adrift. The gap stabilized at around 5m, as teams Cannondale and Argos-Shimano took control of the chase.

Once on the long straight towards Muscat, facing the wind, the gap increased again and reached 6:25 at km 62. As the two escapees closed in on the first climb of the day, the gap dropped down seriously. With 25kms to go, they only had a 30s lead. Climbing up Al Hamriya, Traksel was the first to be dropped. It was then Kinoshita’s turn to be caught by the hungry pack. Voss (TNE) broke away in the last moments of the climb and reached the top in first position with a 17s advantage over Kennaugh (SKY), Wiggins (SKY) and the entire peloton. The pack remained bunched all the way to the second bonus sprint (km 135.5) claimed by Gruzdev (AST) ahead of Porte (SKY) and Kennaugh (SKY).

On the second climb up Al Jissah, several groups of riders were dropped behind while Contador (TST) and Nocentini were giving it a go at the front. Eventually, Hernandez (TST) was the first to the top in front of Impey (OGE) and Nocentini (ALM). A group of around 50 riders powered to the finish on the long descent. On the final straight, three riders attacked with under a kilometre to go: Elmiger (IAM), Gallopin (RLP) and Nibali (AST). But they were to be caught and dropped by the man of the day, Peter Sagan (CAN). The Slovakian indeed flew to his first success of this 4th edition after winning a stage last year.  Sagan wins with a five second lead over Gallopin and Elmiger. 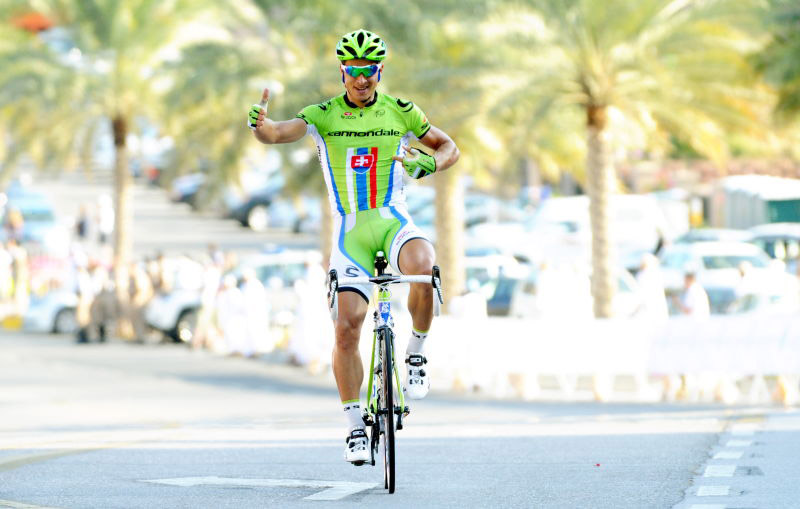 Sagan captures the overall leader’s Red Jersey and has a 9s advantage over Gallopin and 11s over Elmiger. The Cannondale rider also leads the best young rider standings. Meanwhile, former race leader, Marcel Kittel (ARG), who finished the day 121st over 5m adrift, remains the leader of the points’ classification and will therefore wear the Green jersey on tomorrow’s stage 3. Traksel (CSS), yet again present in the day’s breakaway remains the most aggressive rider.

Results from the second stage in Oman