Before the start of what was expected to be the toughest stage of the Tour of Oman, there were some tense faces and the smiling one of birthday boy Cadel Evans. Just after noon, 142 riders took off from Al Saltiyah in Samail for a demanding 143km ride to Jabal Al Akhdhar, also known as the Green Mountain.

Sheikh Abdullah Al Nadabi member of the Shura Council opened the forth stage of the race in Sulitah in Samail and despite an extremely fast start, five men managed to break away at km 11: Bookwalter (BMC), Rast (RLT), Smukulis (KAT), Schillinger (TNE) and Friedemann (CSS). The leading five enjoyed a light tailwind and covered 44.6kms during the first hour. At km 46, the first intermediate sprint (km 46) was claimed by Schillinger ahead of Friedemann and Rast, while the pack led by riders from Saxo-Tinkoff, Sky and Astana remained 4’25 adrift. 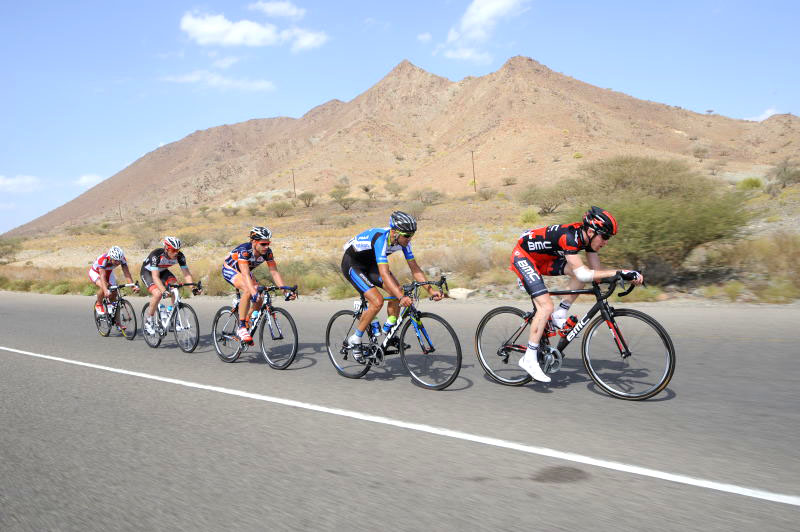 The pack remained in shooting distance of the breakaway riders and the gap slowly dropped down. At the second bonus sprint just before the final climb (km 132), won by Friedemann in front of Rast and Smukulis, the pack remained 1:05 adrift. The leading five were finally caught at km 136. 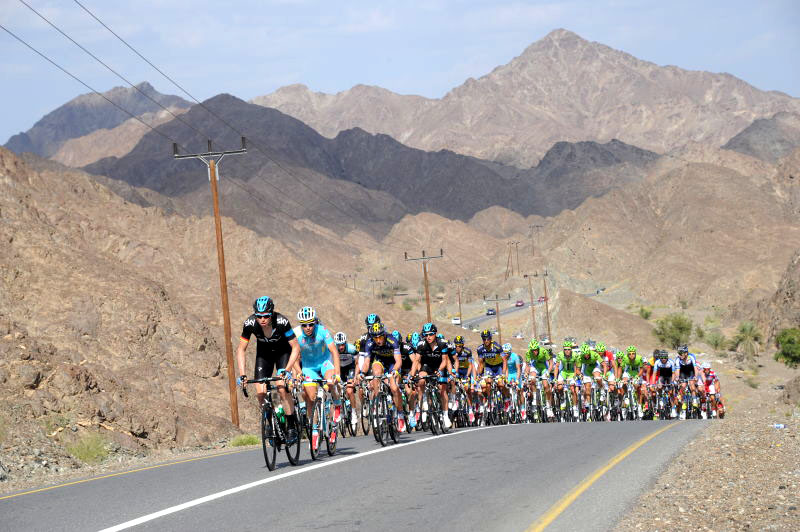 It was always going to be the ending in the imposing Jebel Akhdar mountains which defined this race. With 5.8kms at an average gradient of 10.3%, this is an ultimate endurance challenge for these elite riders so early in the season. In the first moments of the climb up Jabal Al Akhdhar, the battle between the top guns started. While Red Jersey Peter Sagan and Bradley Wiggins (SKY) were rapidly dropped, Alberto Contador (TST) powered away. Maybe too early. He was eventually to be caught by team mate Hernandez, Nibali (AST), and Porte (SKY) with 4.5kms to go. In the final 3 kilometres, 8 men gathered together at the front: Froome (SKY), Evans (BMC), Contador, Nibali, Rodriguez (KAT), Elissonde, Jeannesson (both FDJ), Nocentini (ALM) and Tschopp (IAM). Just before the last kilometre, Rodriguez managed to take off. He was never to be caught and captured a fine win ahead of Froome by 4s, Evans by 22s and Contador by 27s.

Froome captures the overall leadership with a 24s advantage over Evans and 25s over Contador, and will therefore be wearing the Red Jersey on tomorrow’s 5th stage. "To have guys of the calibre of Bradley Wiggins working for you, it was hard not to be in a good position going into the final climb today. It meant I still had the legs going into the last 2k.”

“There's quite a challenging day ahead of us tomorrow but we've got a great team and we've really come together as a unit here. With a 24-second lead it might be hard to hold on, but it's a great position to be in and a good, promising sign for us this early in the year.

I'm enjoying the Tour and it's fantastic to see a race like this embraced so successfully in Oman. The people are so welcoming and it's incredible scenery, not to mention the guaranteed sunshine compared to our typical early-season races."

His Excellency Sheikh Khalifa Al Saadi governor of Al Dakhlia region was the guest of honour at the closing ceremony of the fourth stage stating, “it is impressive to see these cyclists power up the Jebel Al Akhdar. This road is for 4x4 cars only due to its steepness and it was inspiring to watch. The photographs and video of this stage will be a powerful tool for the promotion of tourism and I commend the organisers Muscat Municipality for organising such an impressive event.”

Tomorrow's stage will start at Al Alam Palace in the heart of Muscat and will revisit the impressive series of switch back climbs over the new Bousher-Alamrat road for three ascents. All coming in the final 50km of the race, two of them will offer points for the red and green jersey for the most aggressive rider, with the third climb counting as an intermediate sprint.

Results from the fourth stage in Oman