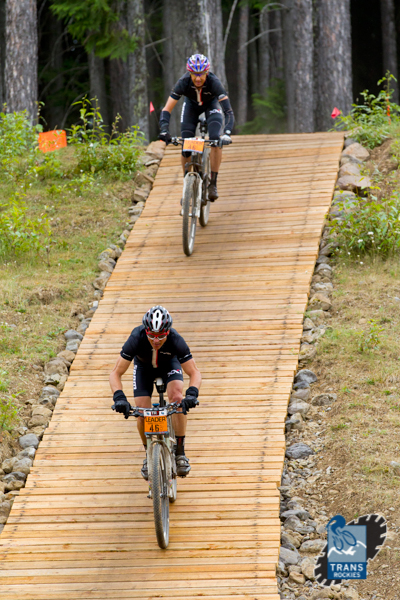 One thing you can count on at the TransRockies Challenge is that,  at some point, it will rain.  The riders woke this morning to ominous skies and, with the 9 AM start looming, a light rain began to fall. After two hot days on the trail the consensus seemed to be that a little rain would help to improve trail conditions and keep the dust clouds down.

Ten minutes from start time organizers were informed that a Moose and her injured calf were on the Project 9 trail.  To maintain rider safety, a route change was enacted, resulting in a delay of the start.  Riders would skip the Project 9 descent and, instead, climb Stove Trail and descend Dem Bones before continuing on the previously planned route.

TR3
Today would be the final ride for the TR3 competitors and they set out to enjoy one last day on the trail or, for the elite riders, solidify their place on the podium.  Melanie McQuaid, in the Women’s Open, and Tony Routley, in the Men’s 50+, each scored a hat trick with their third straight victories.  McQuaid would do so in 2:07:46, wrapping up her Open Women’s crown by a margin of 2 minutes and 17 seconds.  Routley dominated his category today with a 6 minute victory in a time of 2:13:47 and claimed the overall title by over 24 minutes.

At the conclusion of stage two, the top two men in the Open division were separated by only 1 minute and 34 seconds. After a third place finish yesterday, Matt Hadley regained 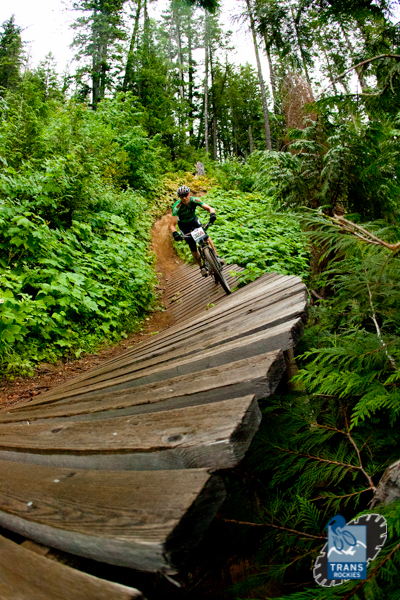 the top spot on the stage podium clocking a time of 1:49:41 and capturing the overall title ahead of Michiel Van Aelbroeck and Mike Vine. The 40+ Men saw Cameron York pick up his first stage win.  However, Jeff Neilson would retain his overall lead and add the TR3 title to his resume after winning the TR4 in 2012.

TR7 Solo
Over the first two days, the TR7 Solo category has provided some  interesting racing.  Today would be no exception.  On the second to last climb, Calle Friberg made a move and dropped the field.  Unfortunately, a missed turn would send him down the incorrect trail and back to the finish line.  In an amazing effort, Friberg retraced his tracks and rejoined the race, going on to finish the stage in an amazing 8th place but dropping back almost 17 minutes in the general classification.  Cory Wallace would notch his first stage win, and the fastest time of the day, in 1:44:58 with Oliver Zurbruegg who maintains his overall lead.

Three days of racing have taken place and three separate ladies have stood atop the Women’s Open podium.  Jean Ann Berkenpas would take her turn today with a 2 second win over Mical Dyck in a time of 2:08:32.  Leighton Poidevin continued his winning ways with a third victory in the 40+ Men’s division while building his overall classification lead to 5 minutes and 49 seconds over Pat Doyle.  Beat Zumstein claimed his 2nd victory of the event with a 50+ Men’s leading time of 2:19:03.

TR7 Team
If anything, the racing across the divisions has been consistent.  Over the first two stages the duo of Sebestian Cadieux Duval and Marc-Andre Daigle of team Louis Garneau - Quebec have posted victories and each day they have been followed by the same two teams in the same order.  Today would be no different with a win in a time of 1:56:13 over Martin Moeberg Hansen and Morten Abel Jensen of team Racing 29 and Sam Barger and Adam Engell of team Republic Wireless.  The story was the same on the Open Mixed side and in the 80+ Men’s division.  Lutz Baumgaertel and Daniela Storch (team Scott Generation) took their third win along with Geoff Clark and Juancito Garcia Casatti.   Cathryn Zeglinski and Jodie Willet kept the pattern going with their 3rd trip to the top of the podium in the Open Women.

The Sram XX1 team of Michael Tobin and Mike Kloser continue to impress.  Never in TransRockies history has there been a team in the Men’s 100+ compete so closely with the Open Men’s leaders.  Tobin and Kloser posted their third straight 100+ win in a time of 1:58:23 and are a total of one minute and 43 seconds behind team Louis Garneau-Quebec after three stages.   Truly amazing considering the combined 48 year age difference between the two teams.

Tomorrow morning the TransRockies Challenge will say goodbye to  Fernie one final time as we move to Blairmore in the Crowsnest Pass.  A part of the event will live on with the launch of the Fernie TR3 in 2014.  On June 28th, 29th and 30th riders will be welcomed back to ride some of the best trails in Western Canada in a premiere cross country mountain bike event.  More information to follow at www.transrockies.com in the coming weeks.

Stage Four will start and finish on Main Street Blairmore at 12 PM Tuesday with the field traveling 32km with 1200 metres of elevation gain.