The second annual Canadian Cycling Hall of Fame induction ceremony and luncheon was held with tremendous success over the weekend of October 1st and 2nd. 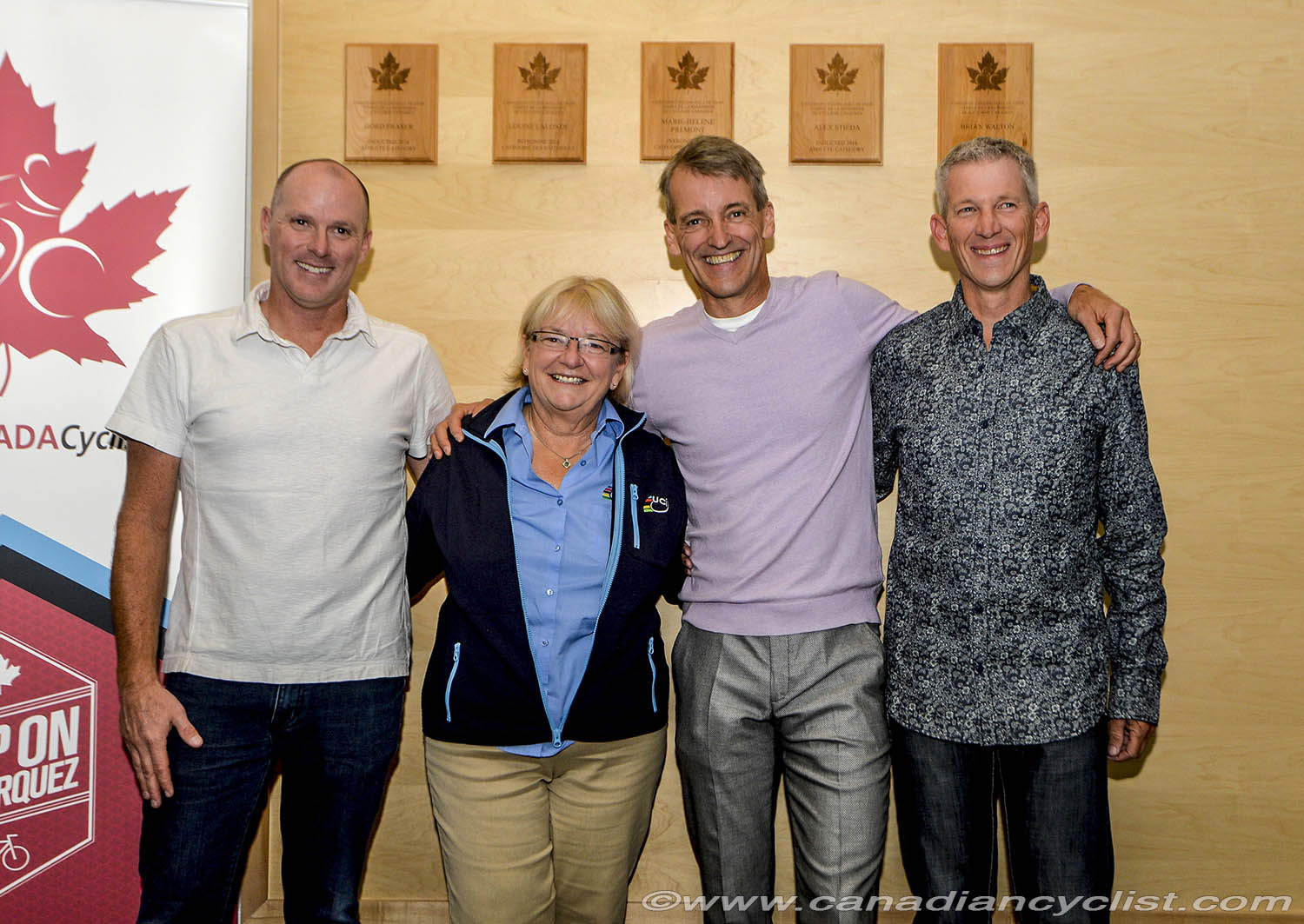 Official unveiling of the plaques 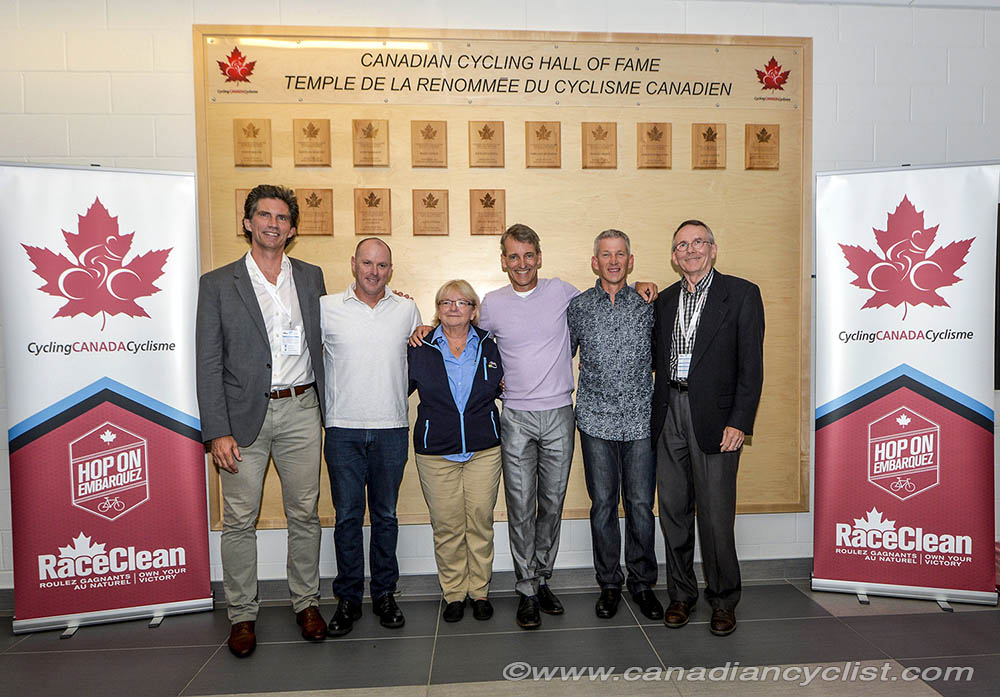 The ceremonies began on Saturday, October 1st, with the official unveiling of the plaques at the permanent home of the Hall in the Mattamy National Cycling Centre, prior to the start of the final session of racing at the Milton International Challenge.The inductees who attended were Gord Fraser, Louise Lalonde, Alex Stieda and Brian Walton.  Afterward, inductees met with supporters and sponsors at a VIP cocktail event on the infield of the velodrome while watching the competition. 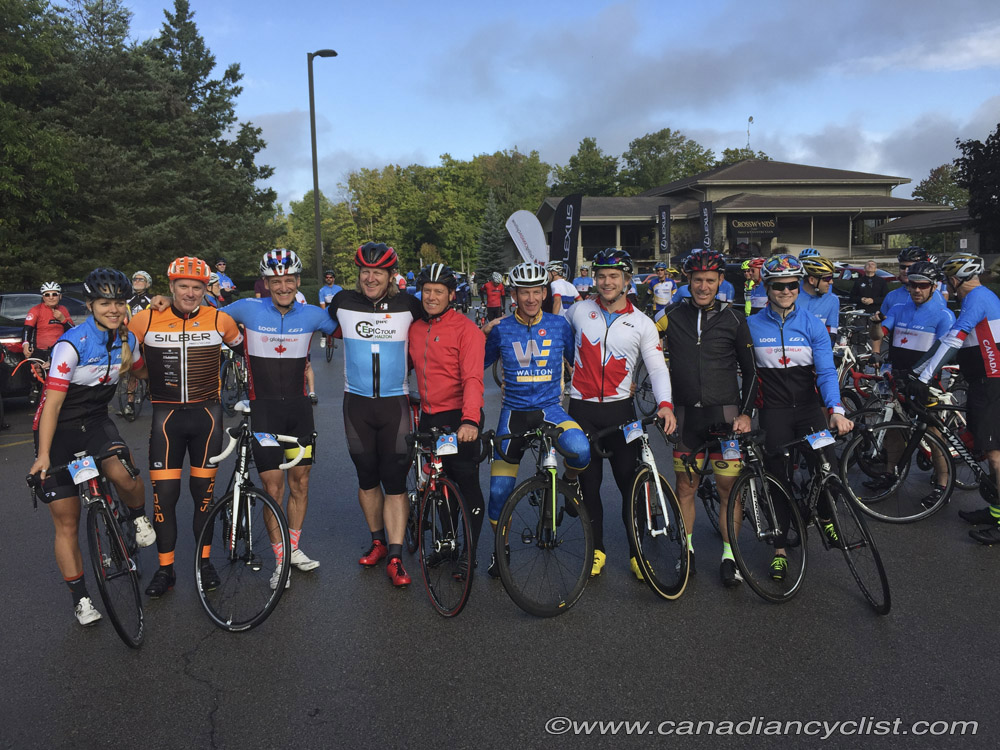 About to start the Ride with Legends

On Sunday morning, three of the inductees - Gord Fraser, Alex Stieda and Brian Walton - joined approximately 100 members of the cycling community for the first "Ride with Legends p/b Lexus", a fully supported ride through the beautiful Halton Hills region.  2015 inductees Steve Bauer, Curt Harnett and Gordon Singleton were also on the ride, along with Rio Olympians Hugo Barrette, Kirsti Lay and Kate O'Brien. 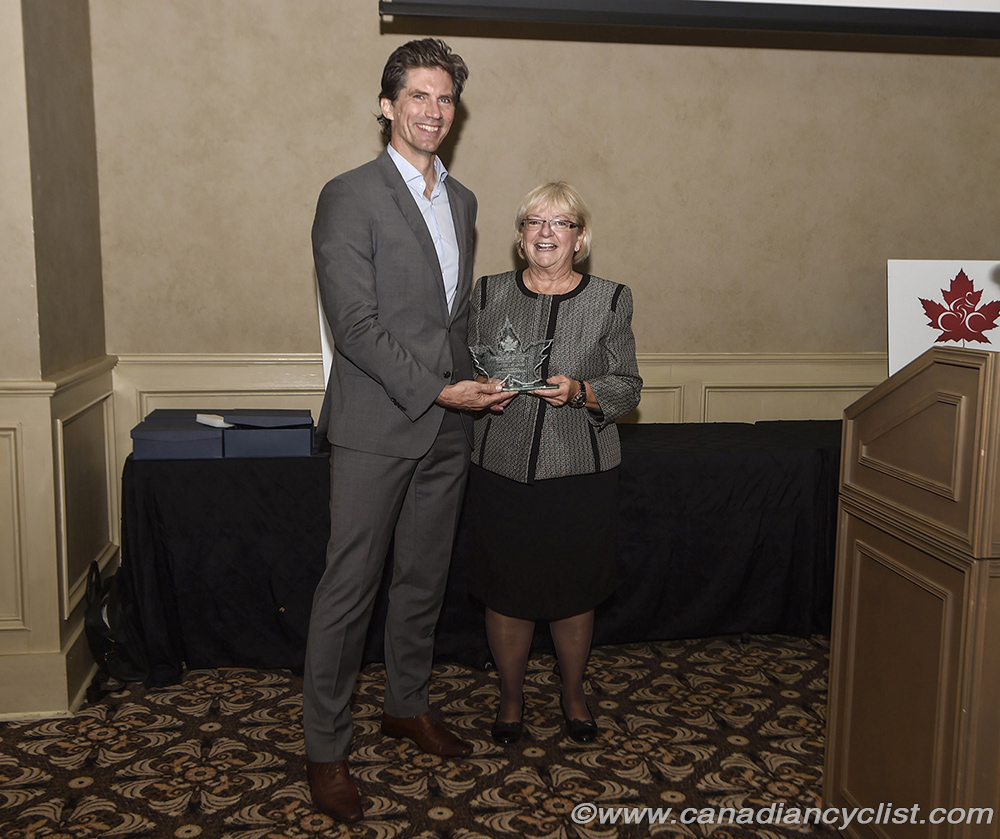 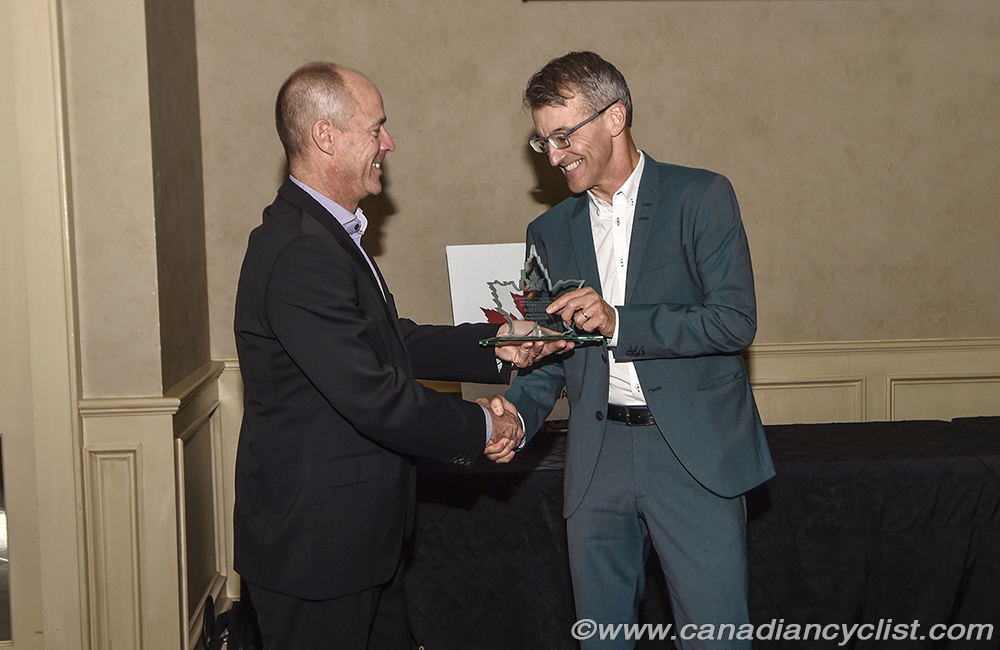 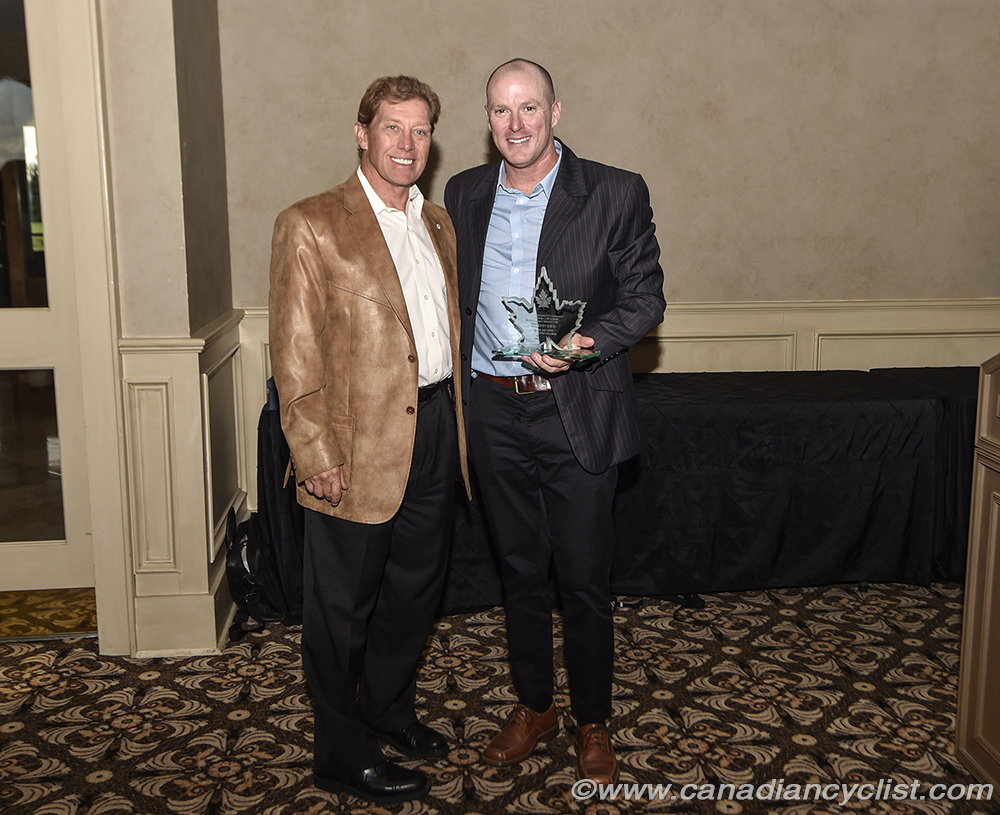 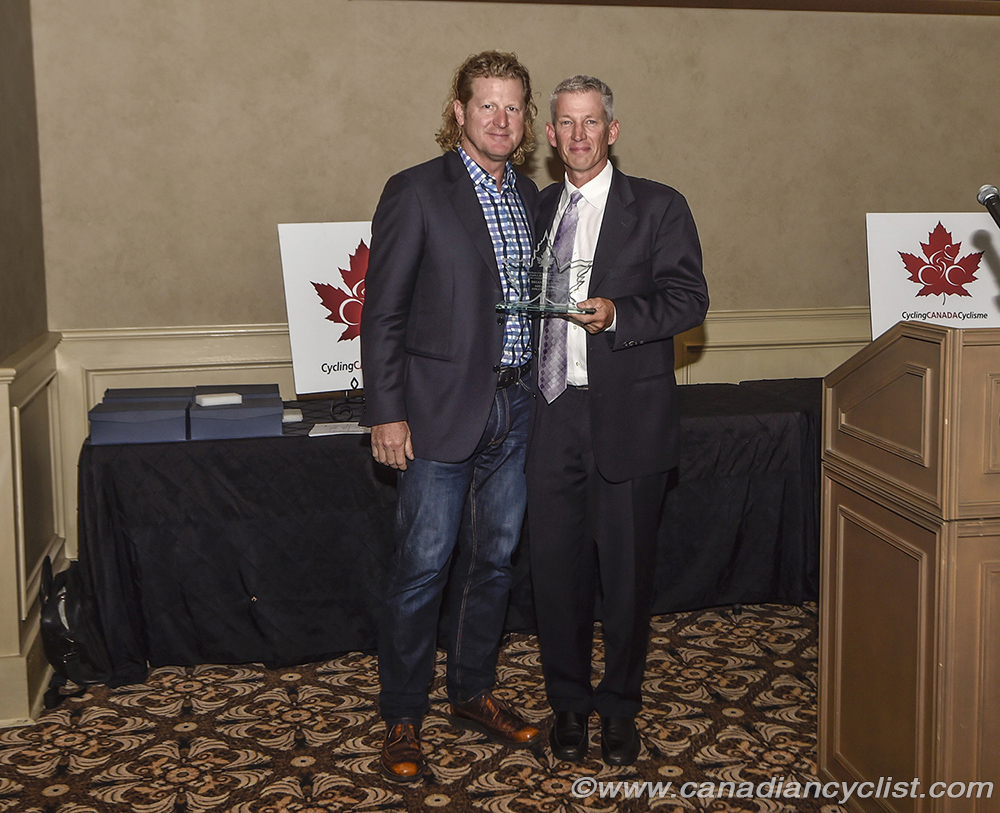 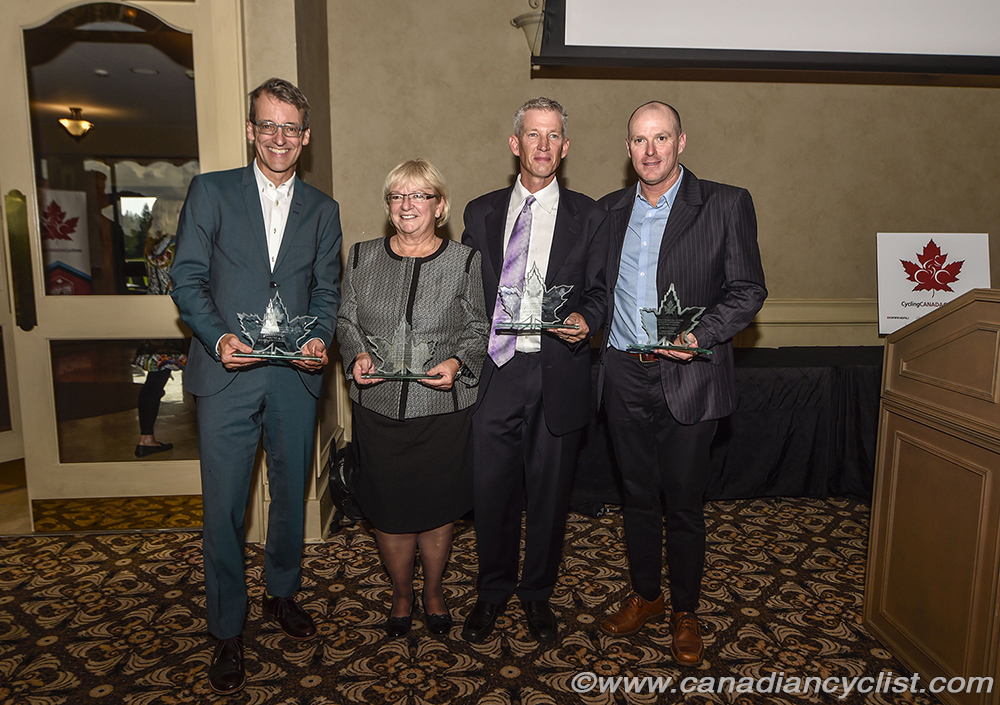 Following the ride, the Canadian Cycling Hall of Fame induction luncheon honoured the inductees with presentations highlighting their accomplishments, as well as crystal awards as a keepsakes.  Each of the recipients present spoke about their careers, including acknowledgements of the individuals and organizations that made their accomplishments possible.  A moving tribute to 2015 inductee Jocelyn Lovell, who passed away earlier this year, was also held.

John Tolkamp, President of Cycling Canada, stated, "We believe it is important to honour the individuals who are instrumental in building our sport, and there is no better way to recognize them then through this induction into the Hall of Fame.  This year's inductees are special in that they continue be involved and give back to the sport, and remain exemplary role models."

1908 Olympic Men's Team Pursuit squad
1908 Olympic Bronze medal - 4000m Team Pursuit: William Anderson, Walter Andrews, Frederick McCarthy and Willie Morton. At the London 1908 Olympic Games Canada sent a team of ninety-one athletes of which sixteen won medals. The Men’s Team Pursuit was 1,980 yards (1,810.5 meters) which was three laps of the track. In addition to the MTP, the four combined for an additional twenty-two event entries at those Games.

Gord Fraser
Gord Fraser was a three-time Olympian and five-time Commonwealth Games competitor who logged over two hundred individual race or stage victories in his career. He is considered the most successful professional sprinter in North America. In addition to his three wins in the Tour de Langkawi (2000, 2001 & 2004) he also had wins in the GP du Midi Libre, Criterium International, and GP Rennes. Other highlights included winning two NRC season points’ titles, a Canadian National Championship and a memorable silver medal in the199 Pan Am Games on home soil where Brian Walton won the gold. His top Olympic result was 16th in Sydney.  Since his retirement from competition, Gord has remained involved in the sport as a Director Sportif.  He is the DS of the highly successful Canadian team, Silber Pro Cycling.

Louise Lalonde
The primary focus at sporting events is rightfully on the participants, but behind the scenes are individuals who provide the framework that ensures the competition takes place. One such person is cycling commissaire Louise Lalonde. Highly regarded as an international commissaire for road, track, and para-cycling, Lalonde has also officiated in mountain biking, cyclo-cross, BMX and served as an anti-doping officer. She has served at countless events, from local races to the Olympics in addition to serving on the Cycling Canada Officials’ Committee. Louise was also the first person certified by the UCI to train commissaires in the discipline of para-cycling and wrote the initial curriculum.

Marie-Hélène Premont
Marie-Hélène Prémont was the National Champion in Cross Country Mountain Bike for consecutive years from 2003 to 2009. Internationally, her record is outstanding, including 2008 where she won a medal in every World Cup she entered (2 gold, three silver, three bronze). The two-time Olympian claimed the silver medal at the 2004 Olympic Games to add to her World Cup overall titles in 2005 and 2006. In 2007 she was second overall in the World Cup standings and fourth overall in 2011. She won a Commonwealth Games Gold medal in 2006 and Pan American Championships Gold medal in 2000 and 2001.

Alex Stieda
Alex Stieda was the first North American to wear the Tour de France Yellow Jersey.  On the second day of the 1986 TdF. He went on to wear five jerseys in total that year, including the polka dot as best climber, white as best rookie, red for intermediate points, and the combination jersey. After losing the yellow, Alex held the polka dot jersey for an additional five days over the hills of northern France. At the 1982 Commonwealth Games in Brisbane, he won a bronze medal in the individual pursuit and claimed the same result at the 1983 Universiade.

Brian Walton
Brian Walton represented Canada at the Olympic Games on three occasions, including a silver medal performance in the Track Points Race in Atlanta, in 1996. He was also a three-time 1995 Pan American Games medalist including Gold in the Road Race and Points Race and the Bronze medal in the individual pursuit. At the 1999 Pan American Games in Winnipeg, Brian defended his Road Race title with another Gold medal performance. Brian won numerous international races including the 1989 Milk Race during his twelve-year professional career.