The general classification was shuffled for the third time in as many stages on Friday morning at the Tour de Beauce, with Alec Cowan (Silber Pro Cycling) winning the 19.4 kilometre individual time trial and taking the Yellow Jersey in the process.  Cowan also dons both the Points and Best Young Rider jerseys, while his Silber team mate Nigel Ellsay retains the Climber's Jersey. 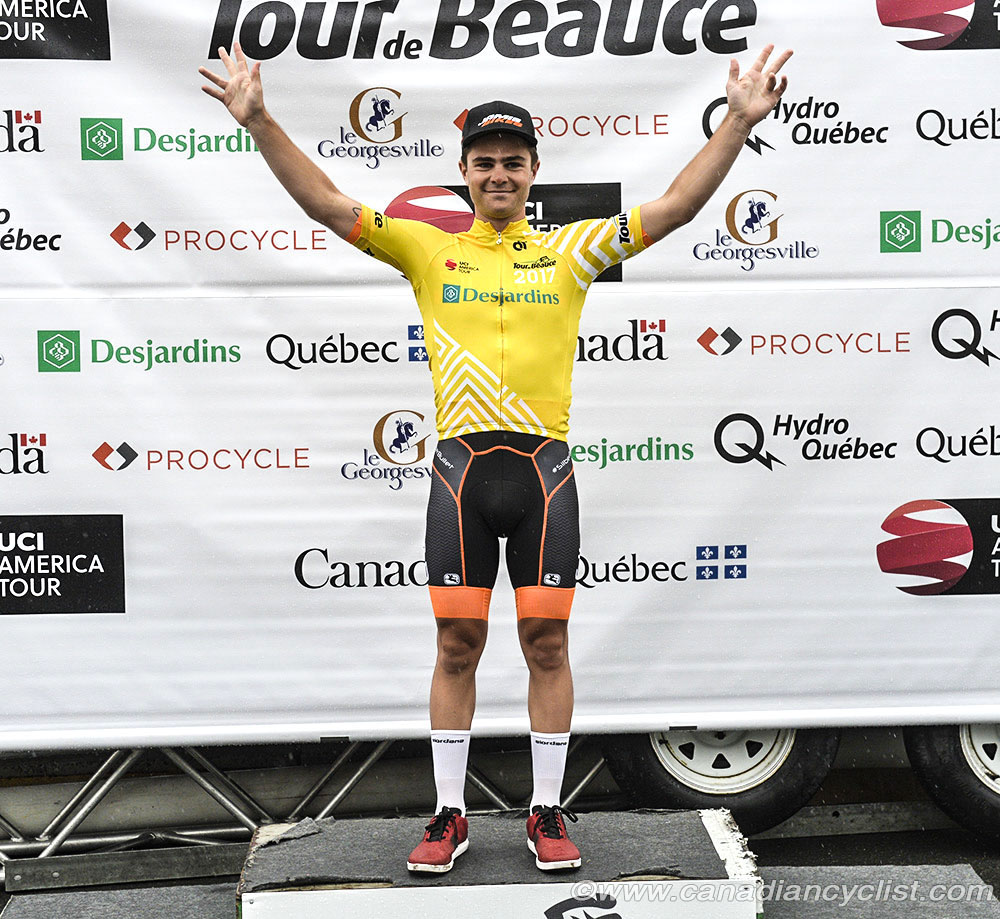 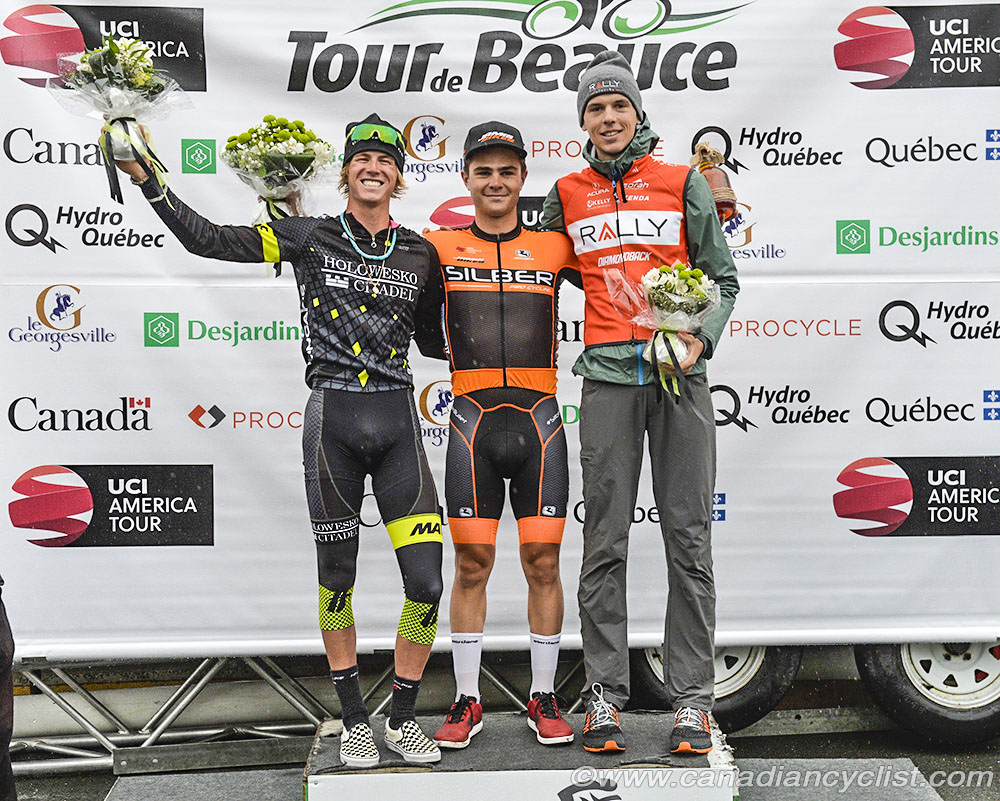 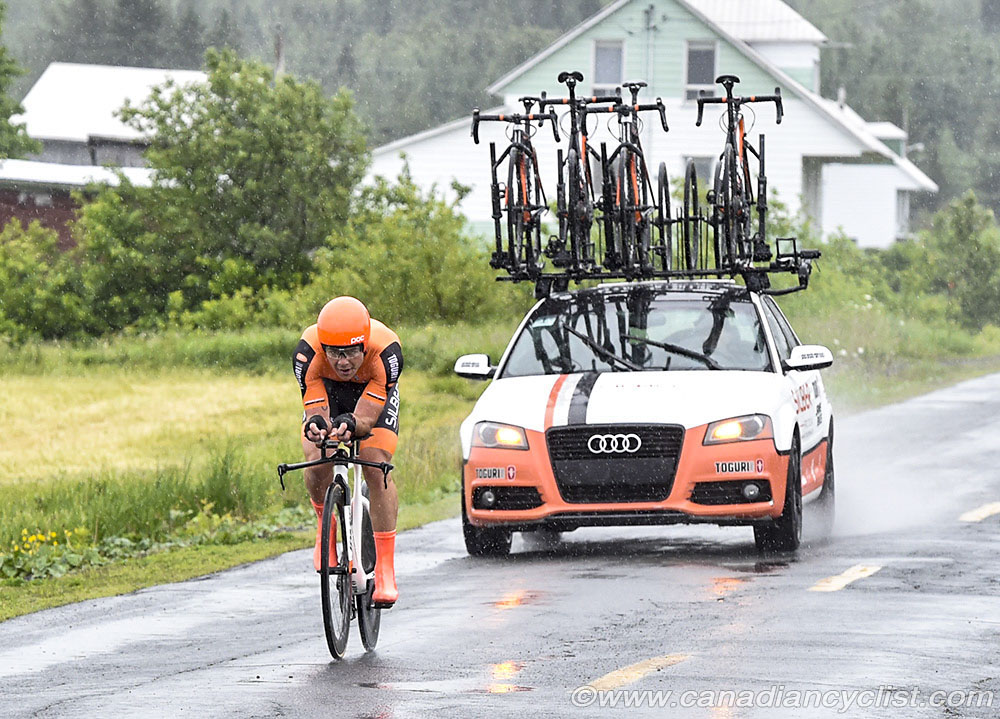 Riders woke to steady rain and much cooler temperatures, in the low teens Celcius.  They were also facing an extremely rough, patched up road with a couple of short gravel sections.

After the Mont-Megantic stage shook up the standings on Thursday, there were only a handful of riders who could realistically take the GC lead from Keegan Swirbul (Jelly Belly p/b Maxxis).  Closest to Swirbul were Jack Burke (Aevolo) at four seconds and Jelly Belly team mate Jordan Cheyne at ten seconds.  Cowan was next, but over a minute down.

However, Cowan had by far the best time trial record, finishing 12th at the Under-23 world championships in 2016 and is a former member of Canada's Team Pursuit program.

Canadian time trial champion Ryan Roth (Silber) was on track for a very strong ride until he flatted and had to get a bike change with less than a kilometre to go.  Rob Britton (Rally Cycling) set the first fast time of 25:36 that stood for any length of time, before he was supplanted by Taylor Eisenhart (Holowesko-Citadel), who was 11 seconds faster.  Stage 2 winner Matteo Dal-Cin (Rally Cycling) slipped in between Eisenhart and Britton, and the standings did not change until Cowan crossed the line eight seconds faster than Eisenhart with three riders still to finish.

Those three riders stood between Cowan and the Yellow Jersey, so their times held more interest than just the stage results.  Cheyne came in next 1:06 down on Cowan and 15th on the stage, followed by Burke at 1:34 (21st on the stage) and finally the Yellow Jersey, Swirbul at 1:45 (24th).  This jumped Cowan into the overall lead by nine seconds over Cheyne and 31 seconds ahead of Burke.  Swirbul dropped to fourth at 38 seconds.

"It's been awesome," agreed Cowan, "I can't be happier taking all three jerseys.  It's more than I expected; I was thinking maybe sneak into the top-3 on GC, but I can't be any happier with how the day went.  The conditions were comparable to Alberta, where I'm from, and I'm used to the winds and the rain and the sh--ty roads.  But you can't be thinking about that, you just have to pedal hard; that's what I did and it worked."

"It was a great day for Alec," said Gord Fraser, Silber's Team Director.  "We were confident; the guys have been time trialling well all year, so I was really optimistic.  I knew he was going to close the gap, and close it significantly, but the Yellow Jersey is even better.  I think we arguably have one of the best teams here, so I think if any team can defend the Yellow Jersey, it's ours."