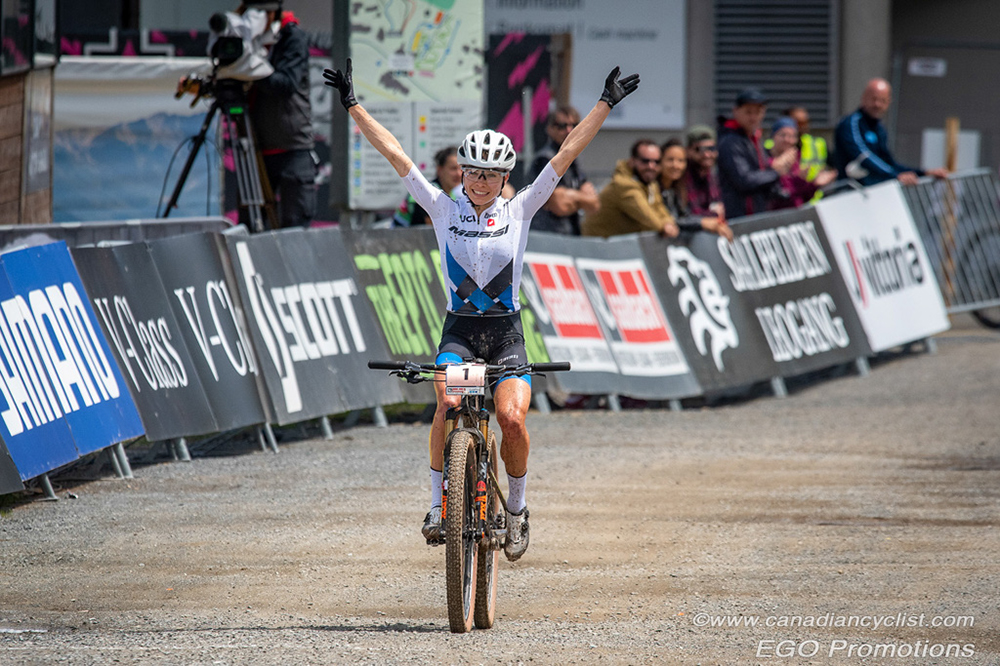 Catharine Pendrel (Clif Pro) was the top Canadian rider, finishing 26th in a sprint against compatriot Sandra Walter (Liv Canada). Pendrel had been riding steadily in the top-25 for the final laps, until a bobble on the descent in the last lap allowed Walter to catch up to her. Walter moved up from the high-40s at the start in a well-paced race-long effort. Three other Canadians finished in the 30s - Emily Batty (Canyon Collective Factory) in 32nd, Jenn Jackson (Norco Factory) in 35th and Haley Smith (Norco Factory) in 37th. Cindy Montambault was 59th, while Laurie Arseneault did not start after separating her shoulder in a crash during training. 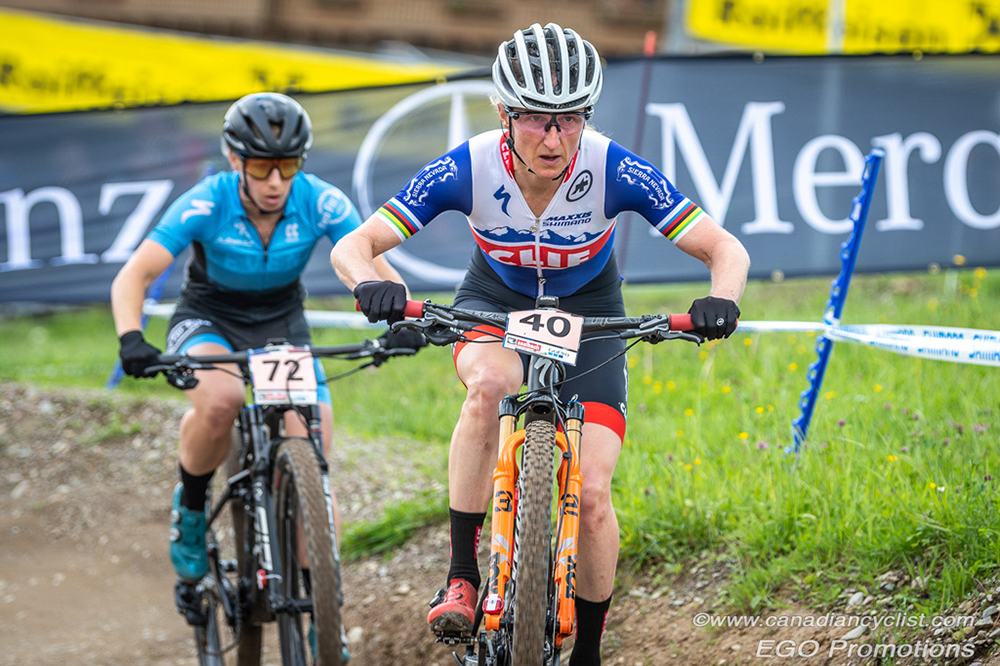 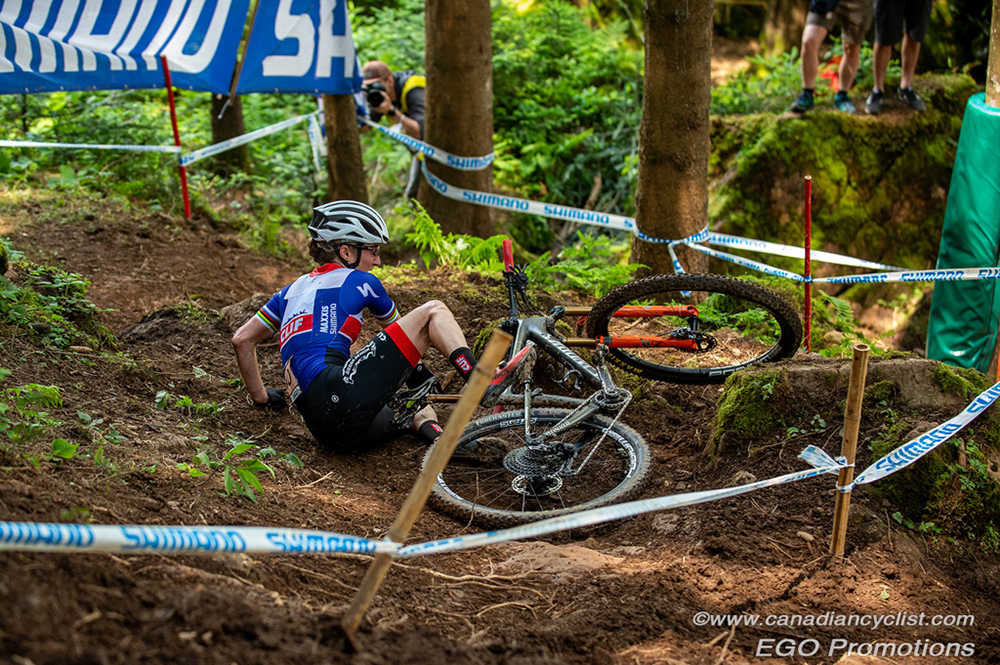 "I had a little crash on the last descent with three girls on my wheel so lost those positions, unfortunately," explained Pendrel. "I felt ready for a better ride this weekend, but was just a little off up and down. Hopefully can fine tune for the next one."

"I'm really happy with today's ride and it feels good to be putting all of the pieces together after struggling in the first two World Cups," Sandra Walter. "I know I have good form, but after not racing in 2020, I felt really rusty and essentially had to learn how to put a complete race together again. Yes, today it took me a while to work through traffic on the first couple of laps, and when the track cleared a bit I was able to start picking up spots. I knew I just needed to be patient and gain momentum, which is how I tend to race. I could see Catharine on the final climb on the final two laps, but thought she was out of reach until I rode up to her where she had made a mistake on the last descent. Then I just followed her down, as attempting a pass would have been sketchy, and then it came down to a sprint, which was really fun, because we've been doing sprints together in training. She managed to hold me off, but it was just a fun way to cap off a strong race." 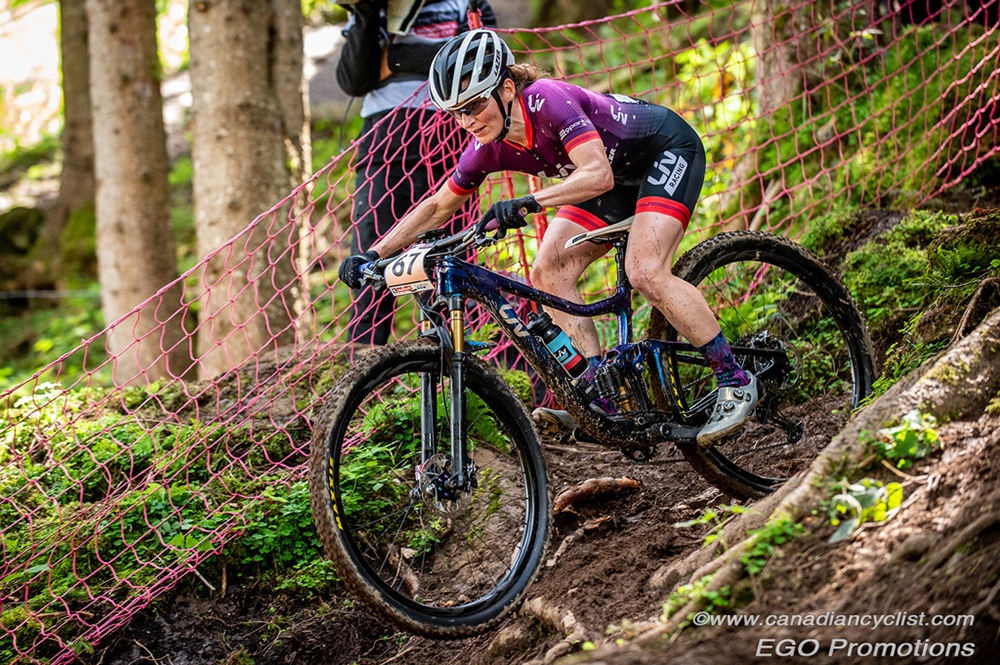 Arseneault posted an update on her condition on Instagram:  "It's all fun and games until you send it a little bit too much and get an AC joint separation. The good news is that it's a minor one and it could of been way worse given the impact of the crash. The bad news is that I won't be able to race this weekend in order to let my body heal properly. I'm a little bit heartbroken to sit this one down. I was extremely excited to race on that track, fire was burning in my heart. But one thing I've learned from setbacks is that everything happens for a reason, even if it gets you like: 'hmmm wtf???' most of the time... Progress is not linear and I have a chance to make the best out of this situation."

Leogang has been a stop on the Downhill circuit for many years, but this is the first time the XCO World Cup has taken place here. Last Fall, it hosted the world championships, so riders weren't completely unprepared, but the long, steep climbs in the Austrian Alps quickly tore apart the fields.

The course suited Lecomte perfectly as a climber, and she took the lead before the end of the start loop and the first of five laps, never to relinquish it. Incredibly, she has led every lap of every World Cup race this season. She steadily powered away from the rest of the field to a gap of over two minutes, before slowing slightly on the last lap. 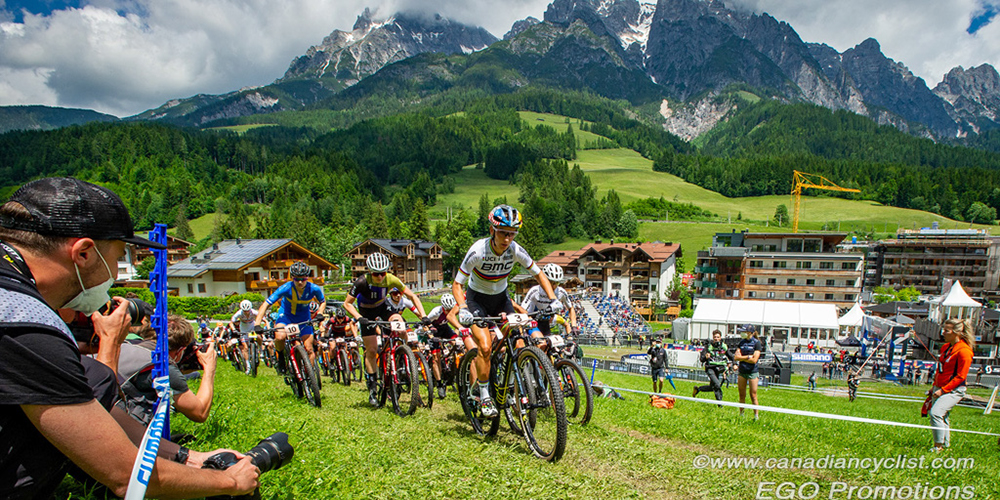 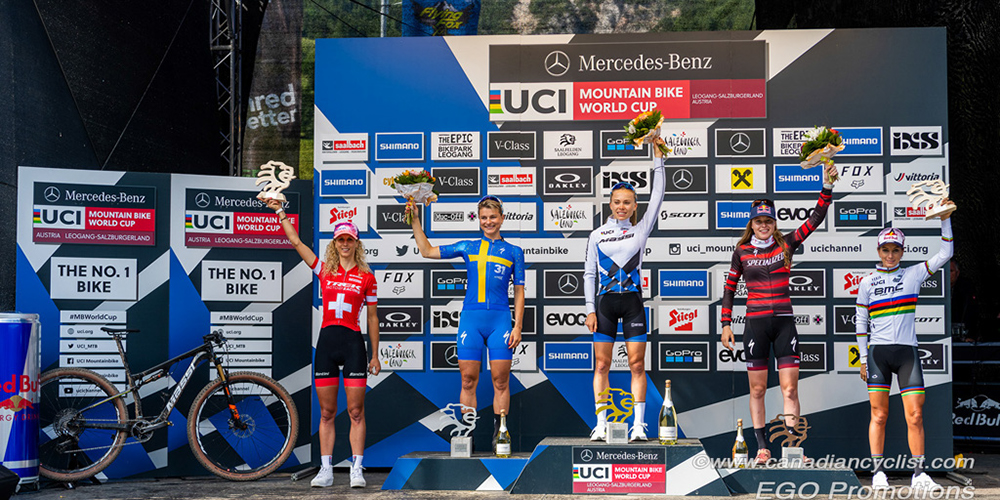 All five at various times led the chase and attacked, before having to back off and recover. Rissveds rode more conservatively and it paid off on the last lap when she rode away to take second with the fastest split of the day, just in front of local favourite Stigger. Neff took fourth, showing a return to form following her serious crash of over a year ago, ahead of Ferrand Prevot.

"I'm very happy to have this shape [fitness]," said Lecomte, "I just prepare the best I can and it is enough. It's a little strange, because I have now won four World Cups as an Elite, but I never won a [UCI] Junior series race or an Under-23 World Cup."

Rissveds, who struggled with depression after her Olympic win and left the sport for two years, has now started to show the form that won her the Olympic title in 2016, a little more than a month before she will defend that title in Tokyo.

"I've been struggling with my self-confidence the last couple of weeks, so this was a very good race for me. I've been practicing a lot lately to commit fully; it's very scary to go all in because it hurts and there is a chance of making mistakes. So I've been practicing that, and I did that even today in the race, and I'm very happy with how it turned out."

Lecomte leads the overall standings with a staggering 1045 points after three races - 365 ahead of Ferrand Prevot, who moves ahead of Haley Batten (Trinity Racing) for second. Batty remains the top Canadian, dropping to 24th from 22nd, while Pendrel moves up to 29th from 37th and Jackson jumps to 31st from 39th. Sandra Walter also makes a big jump, from 58th to 45th, while Smith moves from 53rd to 48th.