On Saturday evening, five new members were inducted into the Canadian Cycling Hall of Fame at a Gala hosted by the FQSC in Bromont, Quebec. Three were inducted as Athletes and two as Builders. 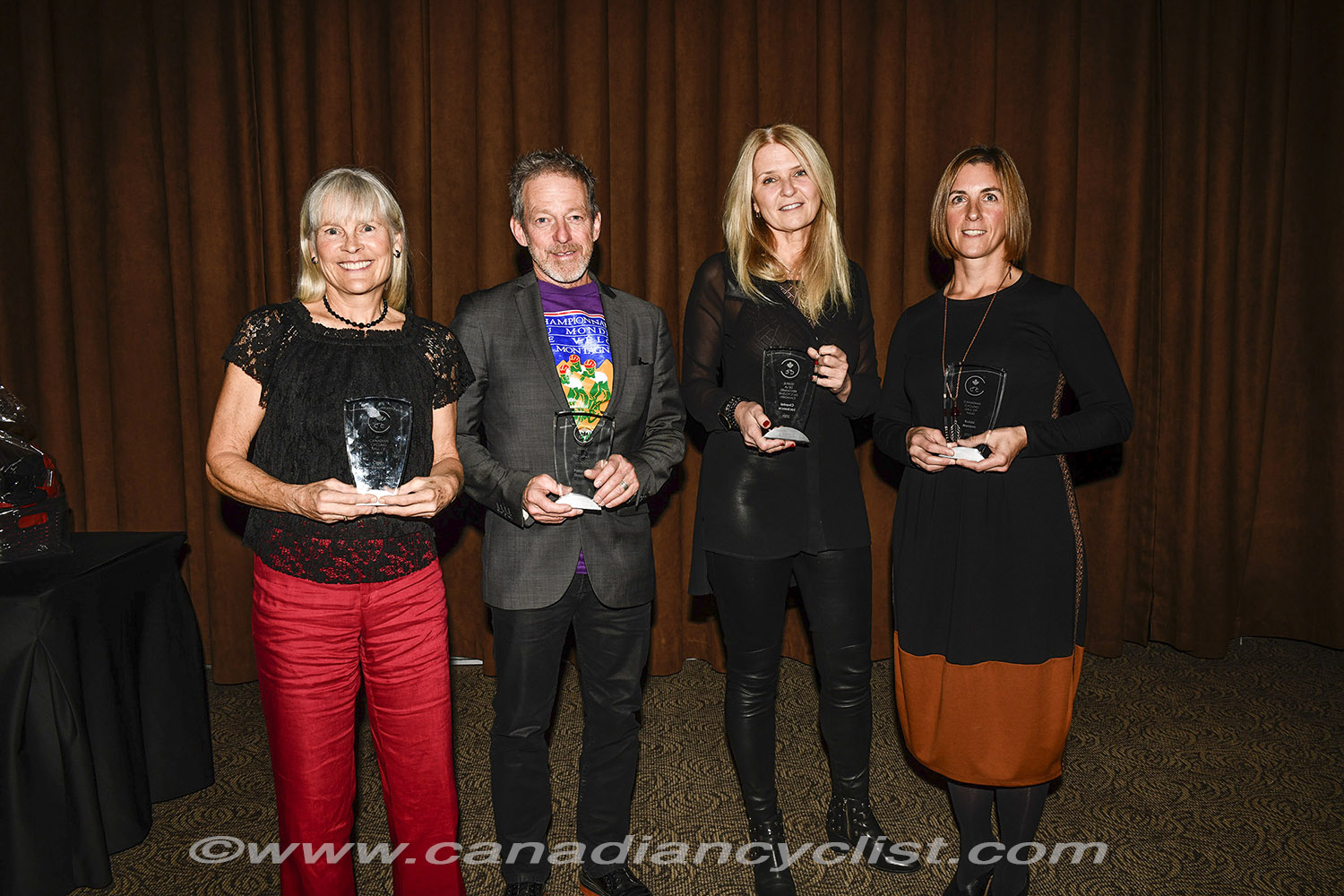 Born in Maracaibo, Venezuela (mother from Iceland and father Canadian), by the age of four Cindy was back in Canada, growing up on the Vancouver North Shore. She is the first ever Women's DH world champion at the inaugural UCI Mountain Bike World Championships in 1990, in Durango, Colorado, USA. Cindy won the bronze medal at Worlds in each of the next two years, and was top-5 in the following two years (1993/94) before retiring. Returned to Physiotherapy rehabilitation career in Rossland, BC.

Robbi Weldon is a four-time Paralympian in two sports Nordic Skiing (2010/2014) and Cycling (2012/2016). In cycling, with her pilot Lyne Bessette, Robbi won a gold medal at the 2012 Paralympic Games in 2012, in the Road Race. At the 2016 Games, with pilot Audrey Lemieux, Robbi was 5th in Road Race and 7th in Time Trial. With Lyne, Robbi also won two world titles - the Road Race in 2010 and the Time Trial in 2011. A the 2011 ParaPan Games, Robbi and Lyne swept the cycling events (4 gold medals) and they were named Canadian flagbearers for Closing Ceremonies.

Pierre Gachon (1909 - 2004) has been inducted as an Early Era member of the Hall. Born in France, his family emigrated to Canada in 1923, settling in Montreal. He was the first Canadian to ever compete at the Tour de France in 1937 and remained the only Quebecer to do so until David Veilleux in 2013. From 1930 to 1937, he competed in eighteen Six Day races on the track, finishing just shy of a podium in October 1930 and taking fifth in 1931 and 1936. In 1934, he set a new Canadian road record by completing the 358 miles that separate Montreal and Toronto in 15 hours and 3 minutes, followed by the 360-mile road from Montreal to Quebec City and back the following year in 13 hours and 17 minutes.

Chantal Lachance and Patrice Drouin put Canada on the map for international mountain bike competitions. Co-founders of Gestev, for 29 years they produced World Cups (starting in the first year of the Series, in 1991) and world championships (1998/2010/2019) at Mont-Ste-Anne, Quebec, as well as Grouse Mountain (Vancouver) and Mazatlan, Mexico, before stepping down after the 2019 world championships. They also provided expert support to organizers around the world. Patrice was in involved in the more technical side of producing events, including building the world-class courses that MSA is renown for. If Patrice was the hands-on trail builder and operations guy at Gestev, Chantal was the 'face' of the organization; the one who works with federations, sponsors, media and everyone else. She was one of the first mountain bike commissaires ever approved by the UCI, and the chief official for mountain bike at the Sydney Olympics.