Once again, the Mont Royal circuit in Montreal hosted a hard fought race among the best men in the pro peloton on Sunday at the GP Cycliste Montreal. Two time tour de France champion Tadej Pogacar (UAE Emirates) outkicked pre-race favourite Wout van Aert (Jumbo-Visma) for the win. van Aert threw his bike to beat Andrea Bagioli (Quick-Step Alpha Vinyl Team) for second. Guillaume Boivin (Israel Premier Tech) was the top Canadian in 37th - as he was two days earlier in Quebec City - while Antoine Duchesne (Groupama-FDJ) received an outpouring of support as he finished what is probably his final pro race. 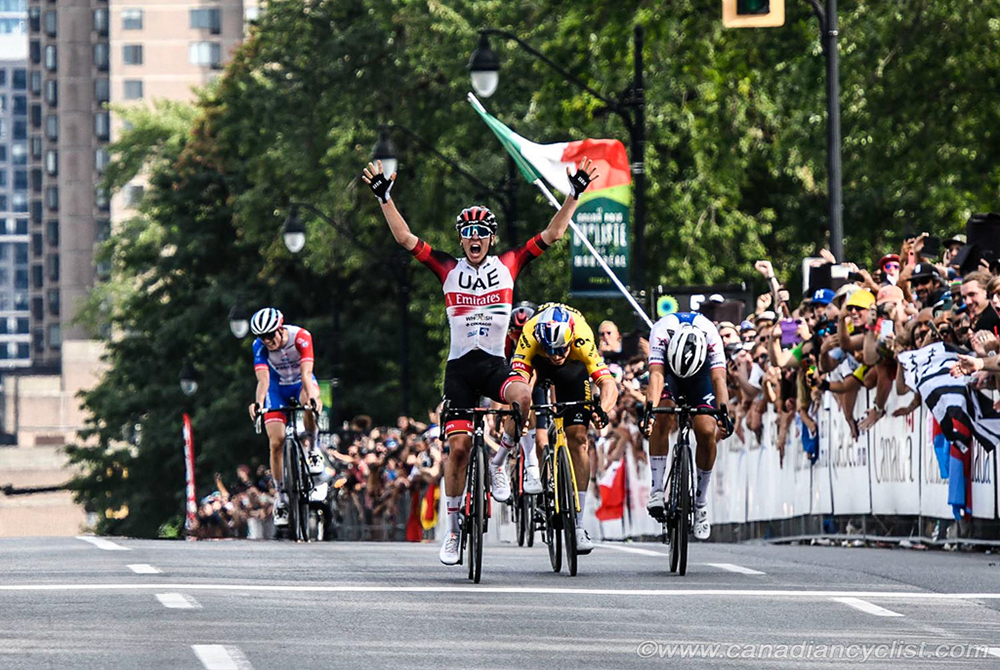 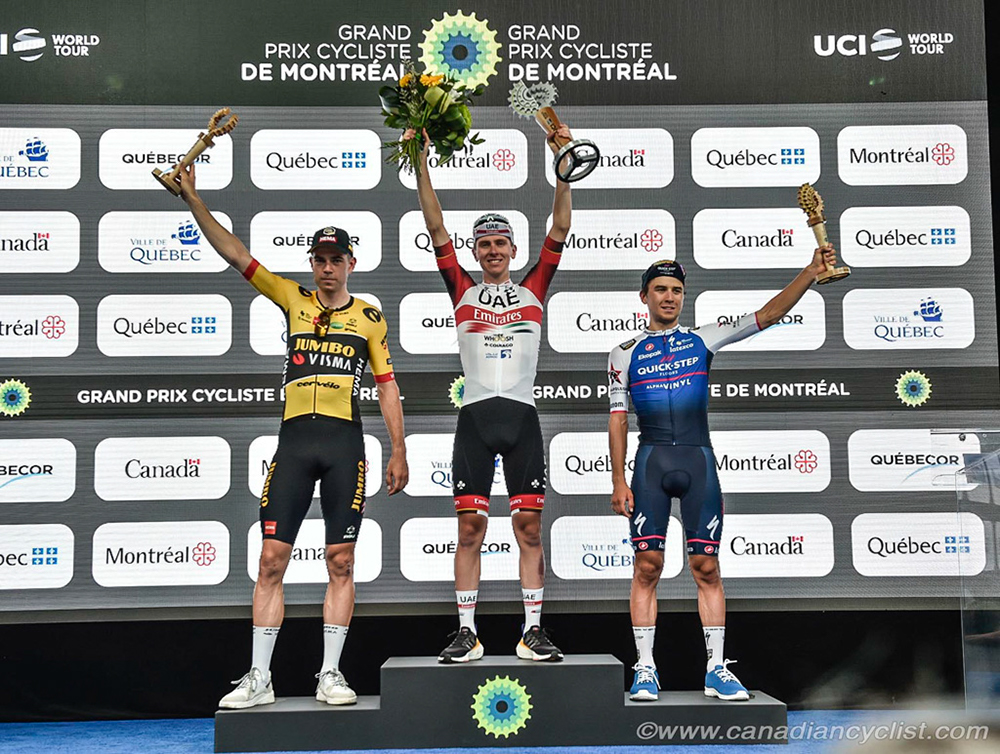 Run for the first time since 2019, Montreal added two laps - for a total of 18 - and a third climb per lap, in addition to the usual Mont Royal and Polytechnique climbs. Riders covered a total of 221.4 kilometres in hot and sunny conditions.

After the obligatory early break attempts, by the third lap there were five riders clear - Duchesne, Florian Vermeersch (Lotto-Soudal), Theo Delacroix (Intermarche-Wanty-Gobert), Andreas Leknessund (Team DSM) and Eddy Fine (Cofidis). They quickly built up a lead of over five minutes, before van Aert's team and Pogacar's decided the gap was getting too big and started to pull them back. 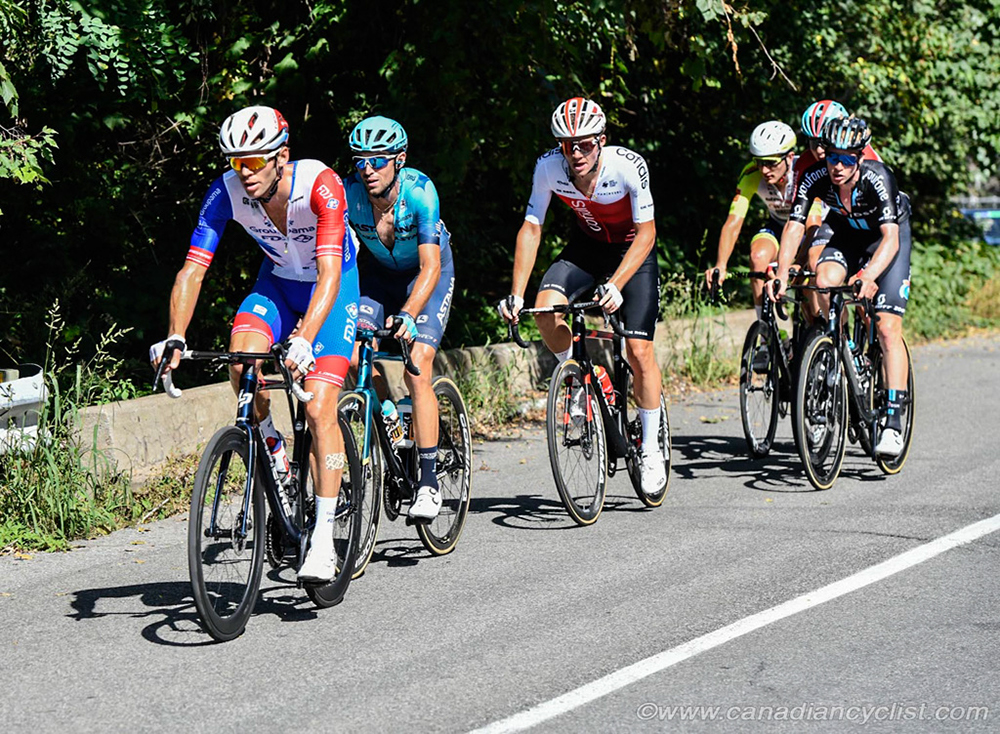 Fine was the first to get dropped from the lead group with a little over five laps to go after sliding out in a corner. Duchesne was dropped before the end of the lap and went backwards through the peloton to eventually finish 70th. The three remaining leaders saw their lead gradually drop as Pogacar's team really upped the pace, shedding many riders from the peloton.

With three laps to go, Leknessund broke off the front solo, while the other two slowly slid back to the chasing bunch. Jumbo-Visma took over pacing making with two and a half laps to go, and Leknessund was finally caught early on the Mont Royal climb as they started to climb it for the second last time. 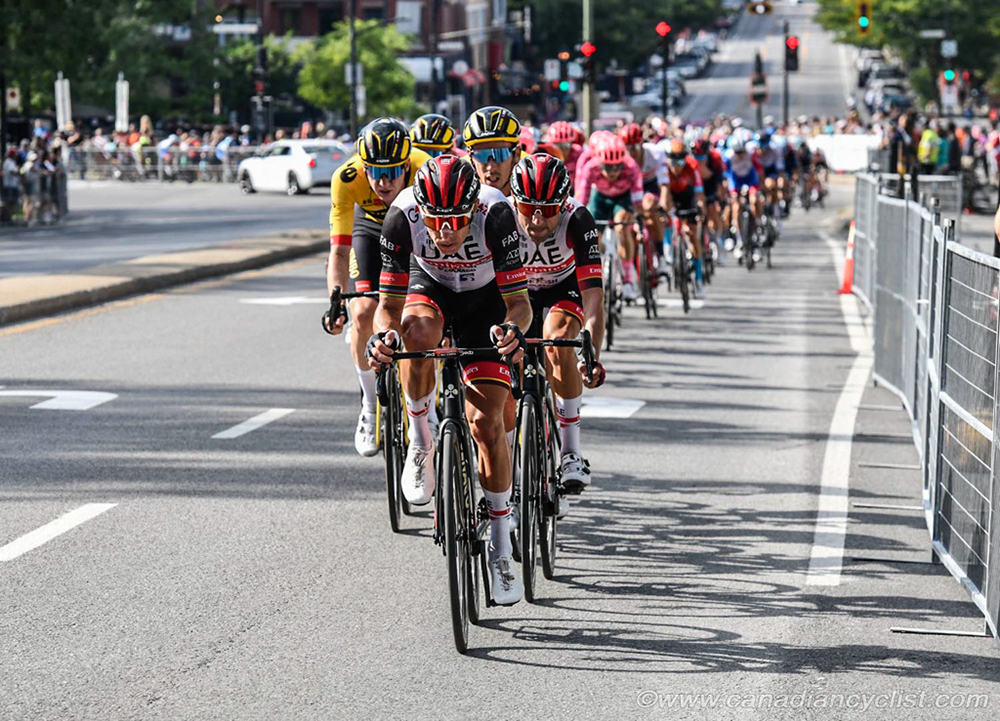 It looked like UAE Emirates and Jumbo-Visma had things well in hand, but then Simone Velasco (Astana Qazaqstan) attacked on the back side of the course, and was joined by Frederik Wandahl (Bora Hansgrohe). As the teams dithered behind, the duo grew their lead to 40 seconds - was there going to be an upset like in Quebec City?

The answer was No, with attacks on the final Mont Royal climb quickly reeling them in. Adam Yates (Ineos Grenadiers) made the final decisive move with a huge attack that only Pogacar could initially follow. They were joined by David Gaudu (Groupama-FDJ), van Aert and Bagioli, and the final selection was complete. Yates led over the top of Mont Royal - which ensured him the KoM award - and the group opened up a 30 second gap on the peloton.

Yates attacked again on the third climb with three kilometres to go, but it was too short to open a significant margin and they rejoined him, setting the stage for a 5-up sprint.

The final 500 metres has the riders go down one side of the divided Park Avenue boulevard, make a sharp 180-degree turn at the bottom, and then a 4% uphill sprint to the line. Pogacar overtook van Aert through the turn, but then everyone slowed and started playing cat-and-mouse. Finally, with less than 200 metres to go, Gaudu jumped. He got an initial margin, but Pogacar chased him down, with van Aert and Bagioli on his wheel, passing the French rider in the final 50 metres. Many expecting van Aert to jump by Pogacar, but the Belgian clearly didn't have it.

Pogacar admitted afterwards that he was very nervous about van Aert: "In the end, it was difficult because we know that Wout is one of the best sprinters in the world, winner of the Green Jersey [at the Tour], but this is a tough finish. I believed in myself, gave it everything, and I succeeded." 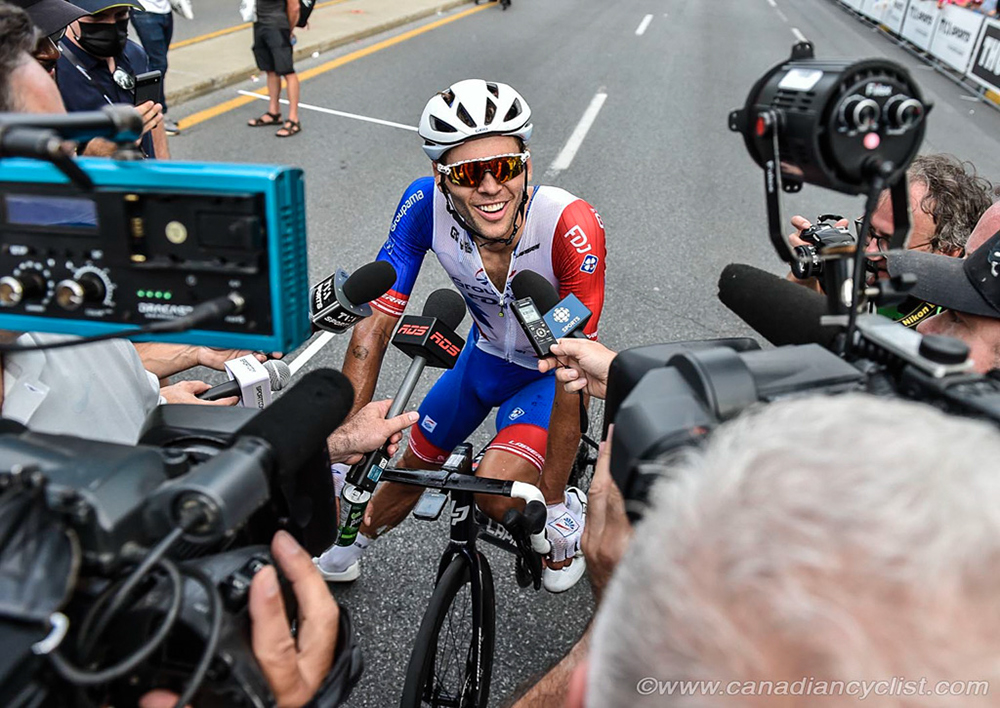 Post-race, local media waited for Antoine Duchesne to come in, and he was given a hero's welcome by the crowd.

We asked him, 'Is this it, is this the last race? He replied, "Should be it."

He also explained about being in the break all day, "It just kind of happened, it wasn't the plan. When I saw the first lap was really hard and I was feeling like shit ... I had a terrible day on the bike ... so I was like, 'I'd rather be up in the front then struggle and blow up anyway'."

"It was really fun. I didn't enjoy the riding, but it was incredible to ride with all these people. It was a really fun day, but I feel terrible in my body right now."