For the first time since 2019, new national cyclo-cross champions donned the maple leaf jersey on Saturday. Held at Layritz Park in Saanich, on Vancouver Island, the Championships drew over 300 riders across all categories, pointing to the built up demand for the return of the sport. Both the Elite men and women saw first time champions awarded the titles, with Ava Holmgren taking the women's and Tyler Clark the men's.

The venue was a late substitute for the originally planned Bear Mountain location, and organizers were busy revising the layout as late as Friday morning. Despite the lack of any significant  climbs or other features, the 3.5 kilometre circuit proved to be a challenging one, with the late addition of an off-camber section that zig-zagged up and down the side of a slope becoming the critical part of the course. 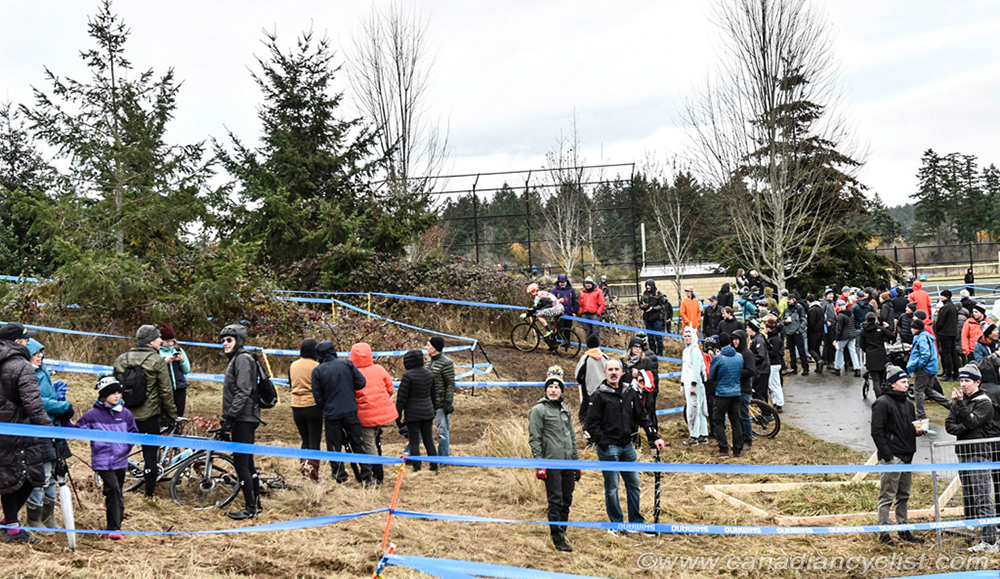 Overnight frost made the course slippery for the morning races, with the midday categories having the best conditions as the ground dried out. However, both the Elite men and women saw the forecasted rain roll in and turn the off-camber section into a mostly running section, with many riders crashing or sliding off the course in the downhill turns.

The Elite men's race quickly came down to six riders - three-time defending champion Michael van den Ham (Escape Velocity/DEVO Giant x Easton), Tyler Clark (CHC Armada), Tyler Orschel, Gunnar Holmgren (Pivot Cycles - OTE), Quinton Disera and Brody Sanderson (AWI Cycling p/b The Crank & Sprocket) - all but van den Ham from Ontario and part of the 'Hardwood' crew. Sanderson and then Orschel were the first to get dropped, while Clark and Disera were the ones setting the pace at the front. Holmgren was consistently in third, but could not close the gap to the leaders, while van den Ham steadily fell back to eventually finish fourth. Disera took a strong lead mid-race, but Clark came back for the final two laps to ride away for the Elite title in his first year as an Elite. 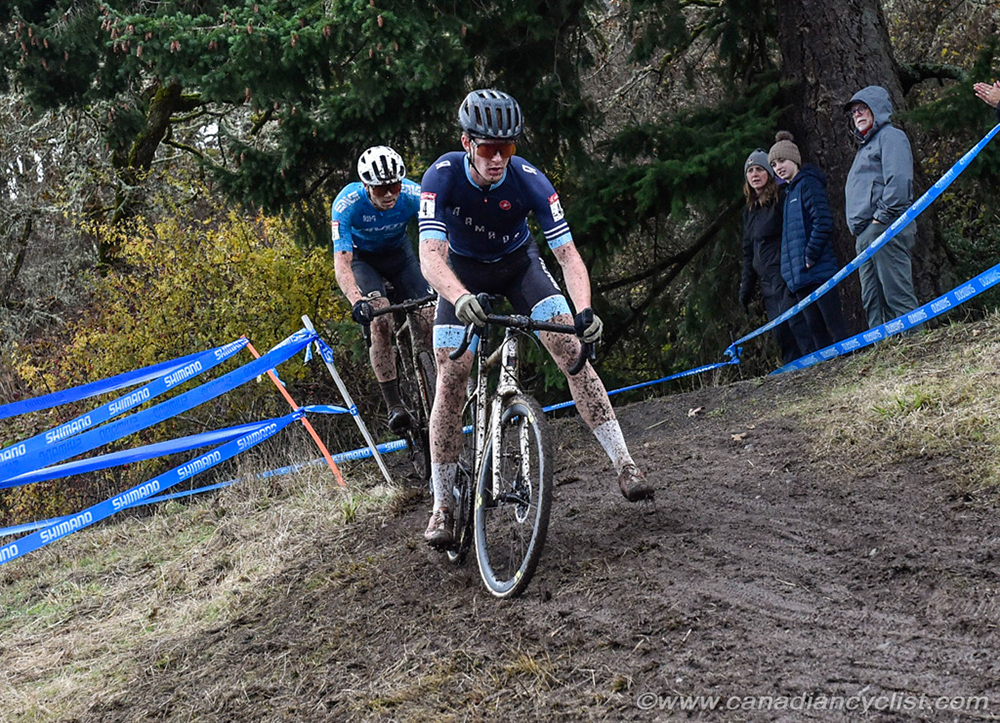 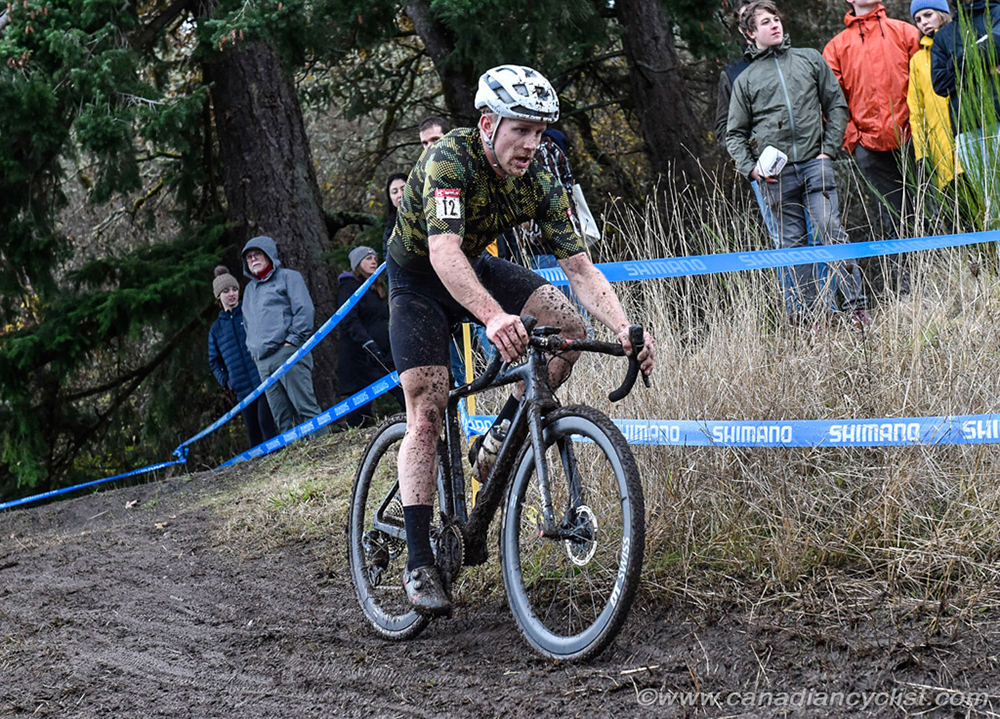 "I noticed on the start line that I was the only one on full mud tires," revealed Clark, "so I decided to go from the front and see where that gets me. I definitely wanted to be the first one into the first technical section, because it was so hard packed and so slippery, that if I made a mistake, then everybody behind me would make a mistake too. So I figured, lead from the front and see what happens."

"It was pretty wild; I noticed early on that it was a bunch of Ontario kids plus van den Ham, it was pretty cool. I've been looking up to these guys for a while now; they're a couple of years older than me. I've been chasing them for a while, so it felt good to be racing against them. Last time we had Nationals, I was third to Orsch [Tyler Orschel] and Gunnar, and from there, I was 'I really want that jersey'; I was so close that year. And then when it got cancelled for the next two years .... so when it came back this year I built my whole 'cross season around it. It means everything."

Clark also mentioned that this year he switched coaches - from Keith Wilson to Keith's wife, Catharine Pendrel [national mountain bike coach]. "Pretty similar training schedule, but I've managed to work with Catharine a bunch at the Elite [MTB] World Cups and learn from her. So I think that's been super helpful. She's got a bit different look on things, being a [two-time] world champion, so I think that's helped a lot."

The Elite women's race, held last, finished in darkness, with the women enduring the wettest, muddiest and coldest conditions of the day. Given the absence of defending champion Maghalie Rochette, this category was guaranteed a new champion. The favourites were Ruby West (Jukebox-Factor), Jenn Jackson (Canyon), Sandra Walter (Liv Racing Collective)and the surprise entry of Junior-aged Ava Holmgren (Stimulus Orbea). Holmgren, a podium finisher on the Junior World Cup circuit, was given permission to ride up two categories with the Elites, but how would she do over the longer time and against older, stronger rivals? 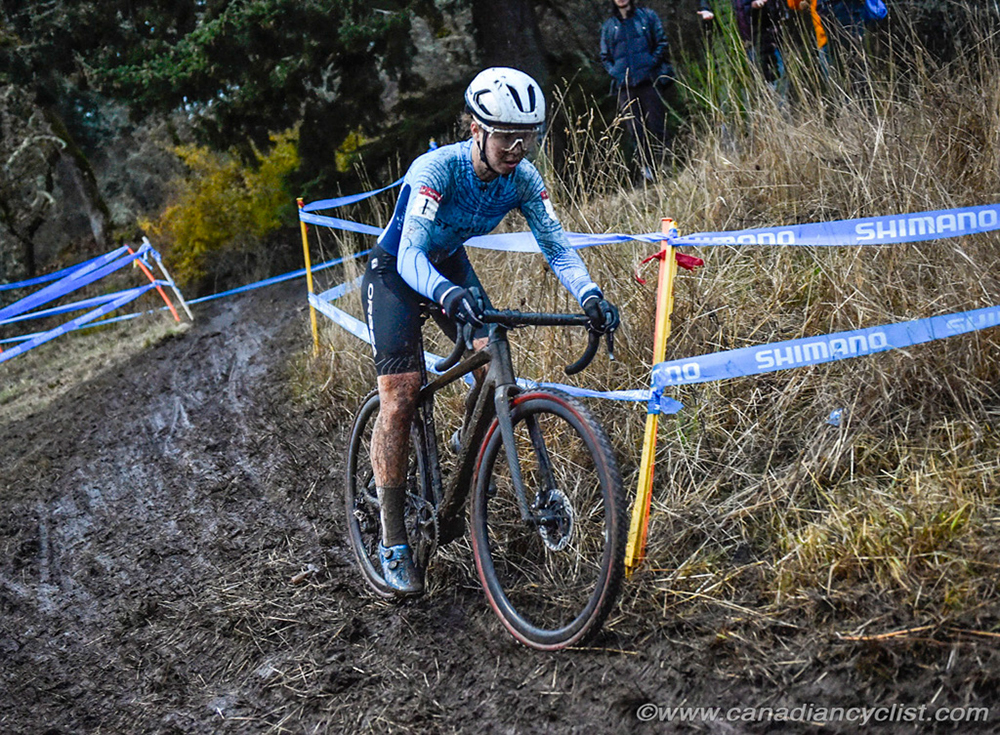 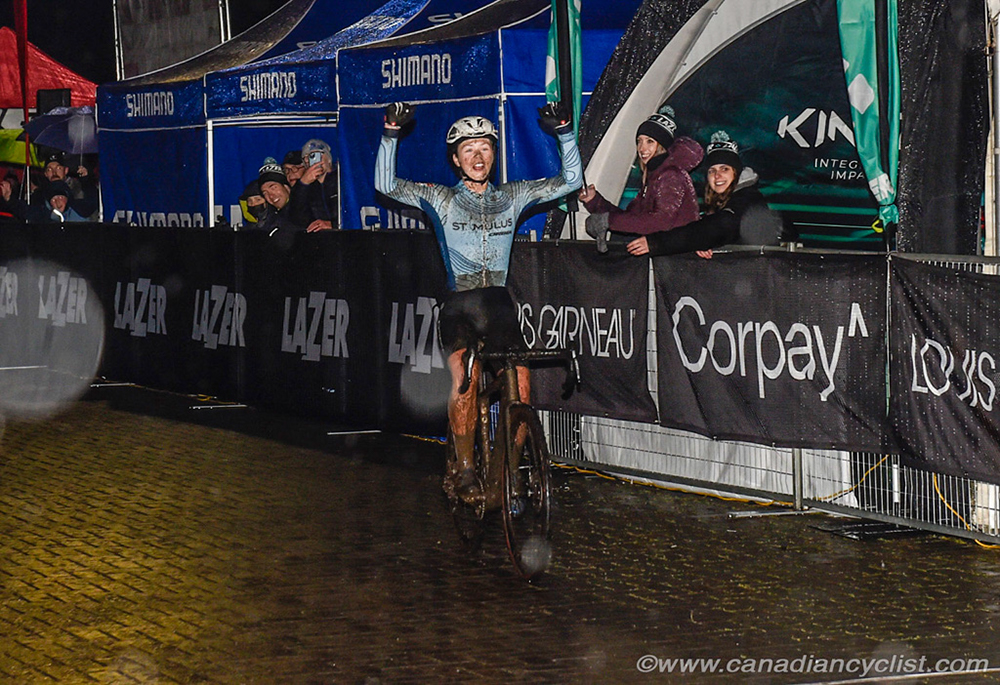 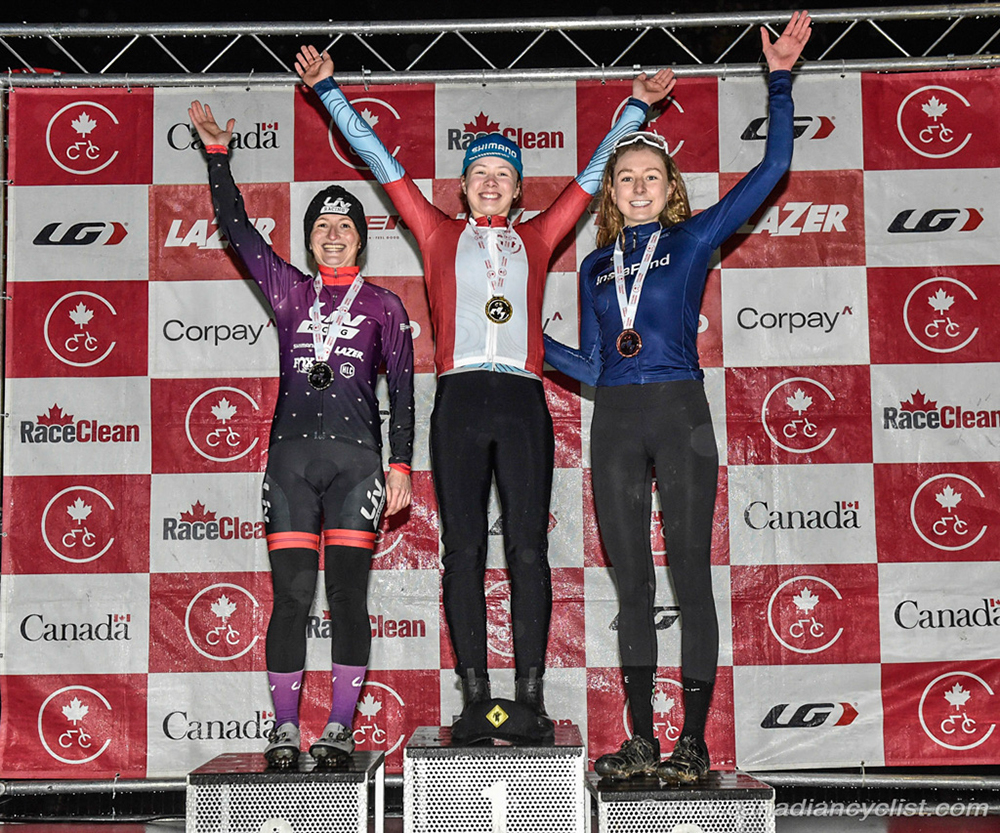 The start saw Holmgren, Jackson and West at the front, looking to battle it out, with Walter trying to move up after a slower start. West rolled a tire on Lap 2, putting her out of contention as she had a long run to the pits for a new bike. Holmgren took the lead, but Jackson was within striking distance until two laps to go, when she crashed on a slippery off-camber corner, and then had to abandon with a mechanical (she had no spare bike). This left Holmgren at the front, and she took a well deserved victory, clearly the strongest on the day. Walter rode her way up to take second, while Holly Henry was third.

"I felt it all came down to who could ride the cleanest today and had the least mechanicals," said Holmgren. "Fortunately, that was me and I felt super strong. The atmosphere was crazy, the cheering was crazy and the course was awesome."

Holmgren also spoke to her decision to ride with the Elites instead of the Juniors. "I was trying to look at it as more of a challenge than a risk, and it turned out really well. Three years ago [last time the Nationals were held, in 2019] if someone had told me I'd be wearing this jersey, I wouldn't have believed them. I'm super happy about that; it means a lot."