Rain, torrential at times, made the 270 kilometre Elite men's road race one of attrition.  Italy did almost everything right to win the big prize at home but, in the end, had the palpable disappointment of fourth place for national hero and Giro champion Vincenzo Nibali.  Spain also had disappointment, having to settle for second and third by Joaquin Rodriguez and Alejandro Valverde, after their perfectly timed effort was foiled by Portugal's Rui da Costa, who outkicked Rodriguez at the line.

Canada had two entries - Christian Meier and Francois (Frank) Parisien.  Neither finished, with Meier a victim of crashes and slow service after a flat, while Parisien had an impressive ride - staying among the leaders until near the end of the penultimate lap, when he finally cracked under the high pace on the climbs.  [Note:  We have an interview with Frank Parisien]

The race started near the coast, in Lucca to the west of Florence, and took a 1o7 kilometre route into the 16 kilometre circuit, which was covered ten times. 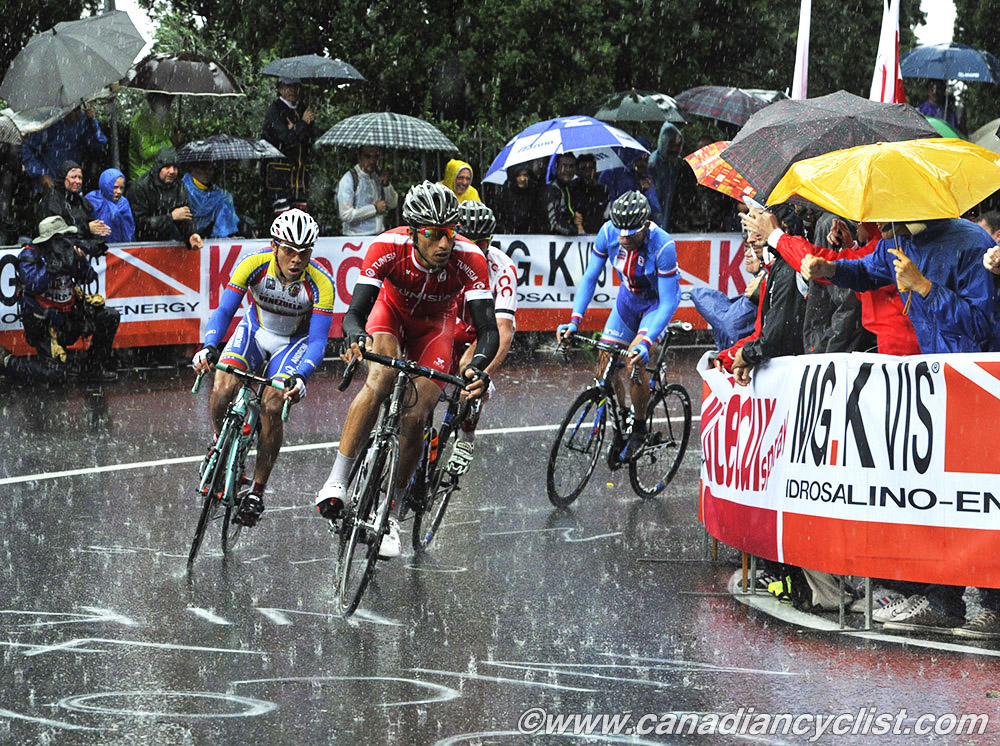 The break goes up the Fiesole climb in torrential rain
Photo gallery
A break of five riders were allowed an early long leash, controlled with marginal interest by the peloton and Italy. Once onto the road circuit, team Italy took control, setting the pace and at times completely covering the road. The gap was steadily reduced over the next four laps, but along with it came plenty of carnage.

The break consisted of Jan Barta (Czech Republic), Bartosz Huzarski (Poland), Matthias Brandle (Austria), Yonder Godoy (Venezuela), and Rafaa Chtioui (Tunisia). It reached a maximum time gap of 7:38 during the early run in to Florence, where the peloton was largely controlled by Great Britain. 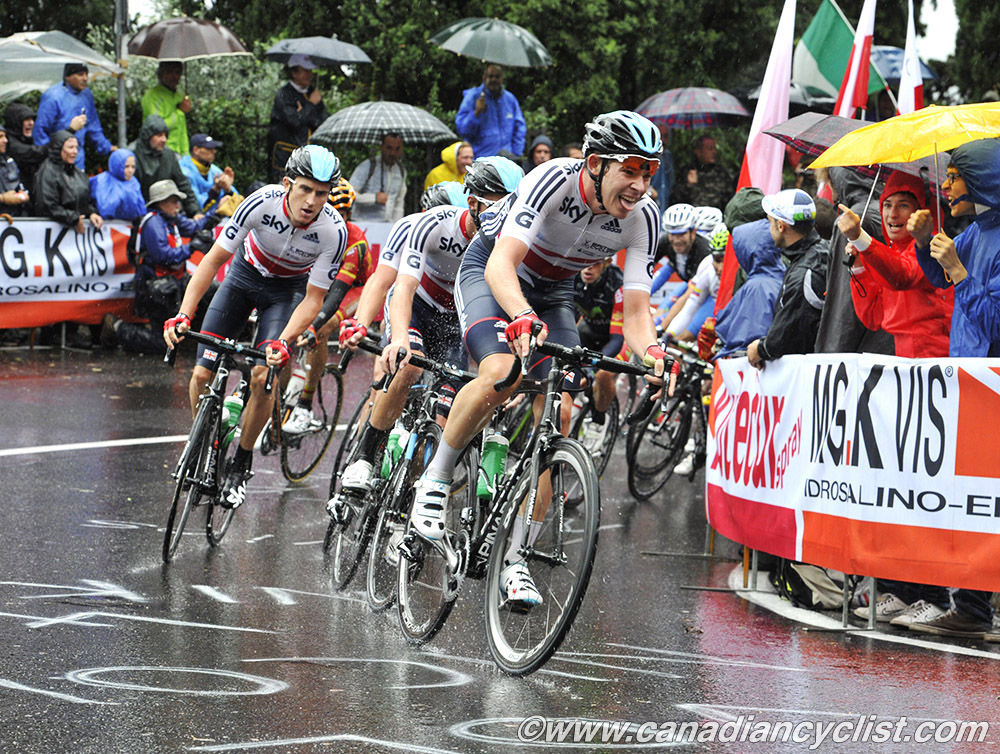 Great Britain led for a lap before pulling out
Photo gallery
Riders were at times rolling through washed out sections of road that were more than five centimetres deep.  By the time the cyclists reached Florence, the rain had well and truly set in, rolling across the course in waves. There continued to be numerous crashes affecting the field in the dicey conditions, no less helped by the newly paved hot mix surface on the road circuit. Of note, Australians Cadel Evans and David Tanner were both taken to hospital for precautionary scans following leg injuries sustained in crashes. Evans later tweeted that he heard someone from radiology ask who was left in the race if all the riders were at hospital. South African Daryl Impey was involved in two crashes, forcing his retirement.

Once onto the road circuit Italy began to control the show, and the field slowly decimated.  From Great Britain, both Cavendish and Wiggins were distanced early and retired. Chris Froome retired at the end of lap four, leaving only Geraint Thomas to fly the British flag. He lasted one more lap before retiring. 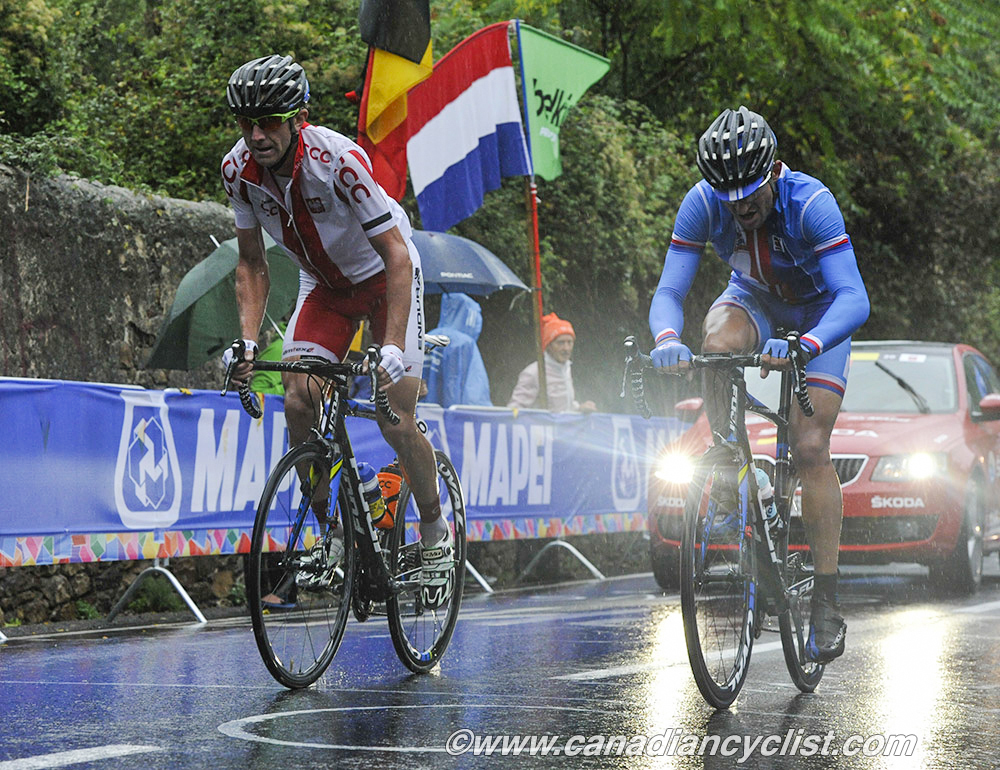 The remainder of the break

Five laps to go: Huzarski and Barta remain from the break, continuing to display a good cooperative work ethic, assisted from their riding together on trade team Net App-Endura. Under constant direction from Team Manager Paolo Bettini, Italy sat up to allow the break to reform momentarily, and opened the gap up again to 3:20 after having it reduced to 1:33 in the previous lap. Over the sixth ascent of Fiesole, the direction from Bettini was to turn the pressure back on, and once again the remaining peloton formed a single file behind the Italian blue train.  At this point only around 73 riders remained in the race.

As one tweet said, 'Finally, after 5-6 hours, an attack!' German Marcus Burghardt attacked on the sixth time up Salviati, resulting in stretching the field even more.

At the top of Fiesole the gap reduced to 1:15.  Cyril Gautier and Giovanni Visconti formed a good combination up Fiesole, and crested Salviati only 42 second behind the lead pair of Huzarski and Barta, with the peloton at 1:27. 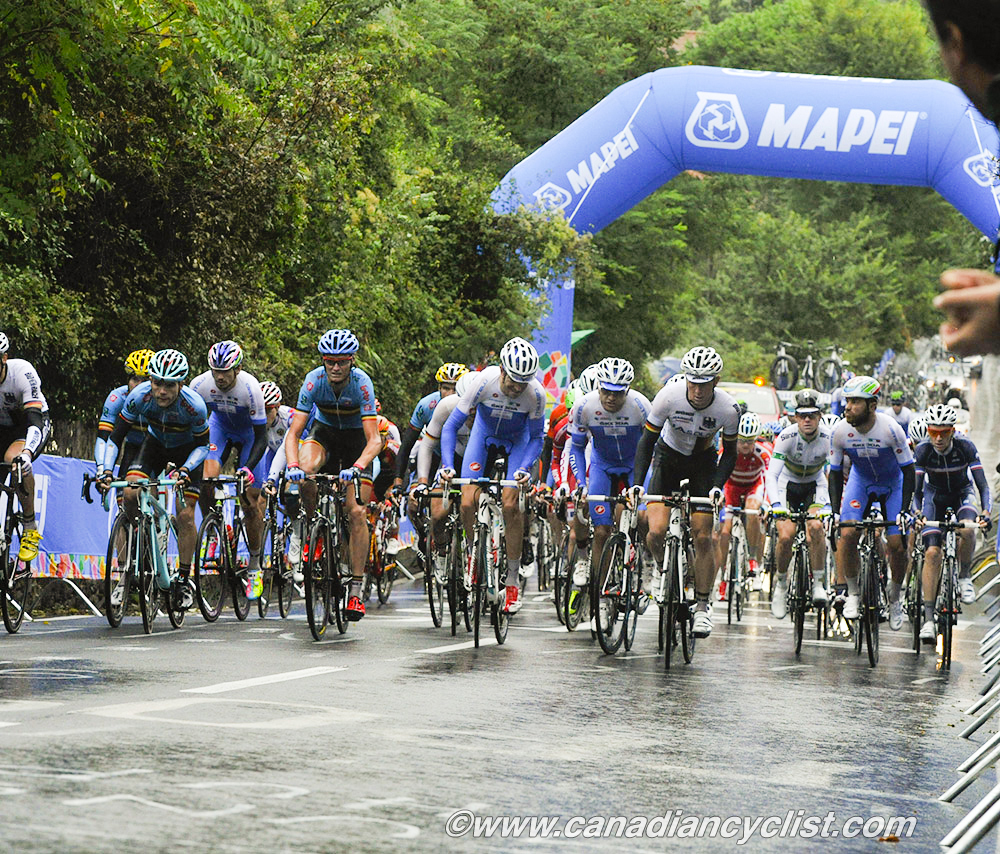 Marcus Burghardt (4th from right) ready to attack
Photo gallery
Three laps to go: Huzarski and Barta lead; Preidler and Kelderman at 25 seconds, Visconti and Gautier at 42 seconds, peloton at 1:27.  Belgium and France take to pace setting duties in the peloton. The rain finally stops and the sun has started to come out.
Preidler and Kelderman are caught by Visconti and Gautier on the Fiesole climb. Huzarski decides to go on alone after Barta cracks. Visconti surges past his break companions, catches Barta and continues on in search of Huzarski. He joins Huzarski on the descent back into Florence.
A crash in the peloton impacts Italian Vincenzo Nibali, Luca Paolini and Frenchman Romain Bardet. With the rain stopped, the roads remain slippery. Nibali returned but rode without enthusiasm, his clothing and race number torn.
Two laps to go:  The gap to Huzarski and Visconti to the peloton is 1:07. Belgium have taken responsibility for the chase and are working hard. Thomas Voeckler (France) is dropped from the peloton.  Visconti and Huzarski were reeled in before the start of the final lap.  There are only 42 riders remaining in the front group, from an initial field of 208. 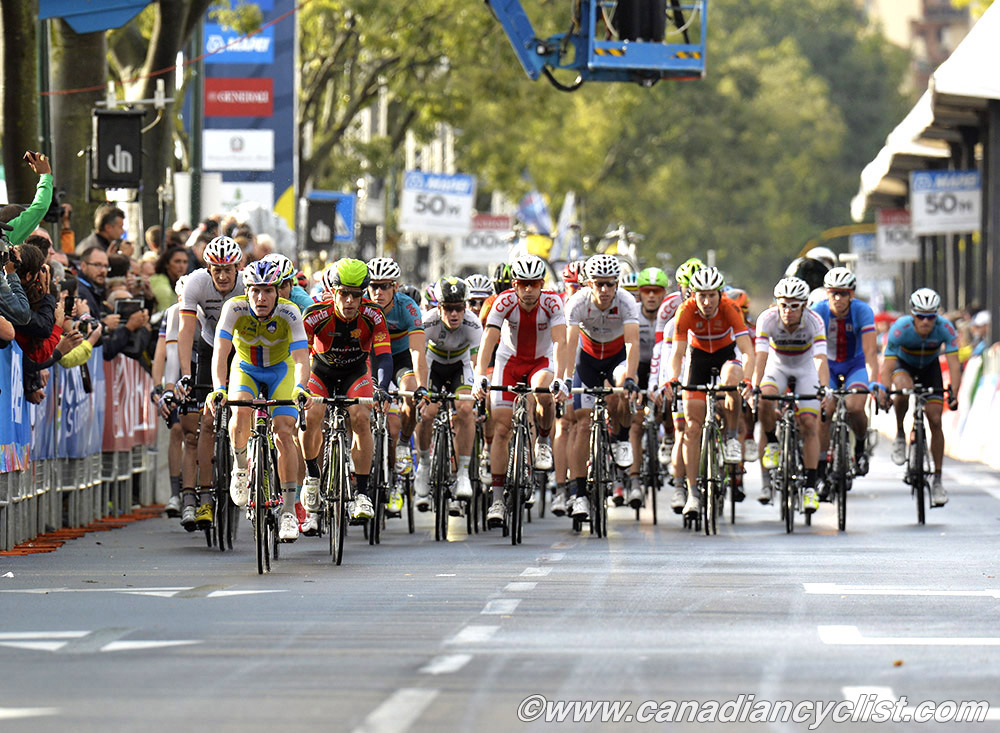 38 riders started the last lap in the lead bunch
Photo gallery
On the final climb up Fiesole, first Chris Anker Sorsensen (Denmark) and then Michele Scarponi (Italy) strung out the field.  But it was a vicious attack by Rodriguez that finally shattered the field.  Only Nibali was able to respond initially over the top of Fiesole, with Valverde, da Costa and Rigoberto Uran (Colombia) joining them on the descent.  Uran crashed hard on the slippery roads, and it was down to four, with Spain holding the upper hand with two riders.

Rodriguez got a gap on the descent, after Nibali chose caution, however, the Italian pulled da Costa and Valverde back to the leader on Via Salviati.  But that seemed to be it the Giro winner, and when Rodriguez went again on the remaining short climb, he could not respond.

da Costa then made a decisive attack as Valverde concentrated on Nibali, and quickly bridged up to Rodriguez.  From that point it was cat and mouse, with the Portuguese rider sitting on until 200 metres to go, when he jumped to the left and held off Rodriguez by less than a wheel. 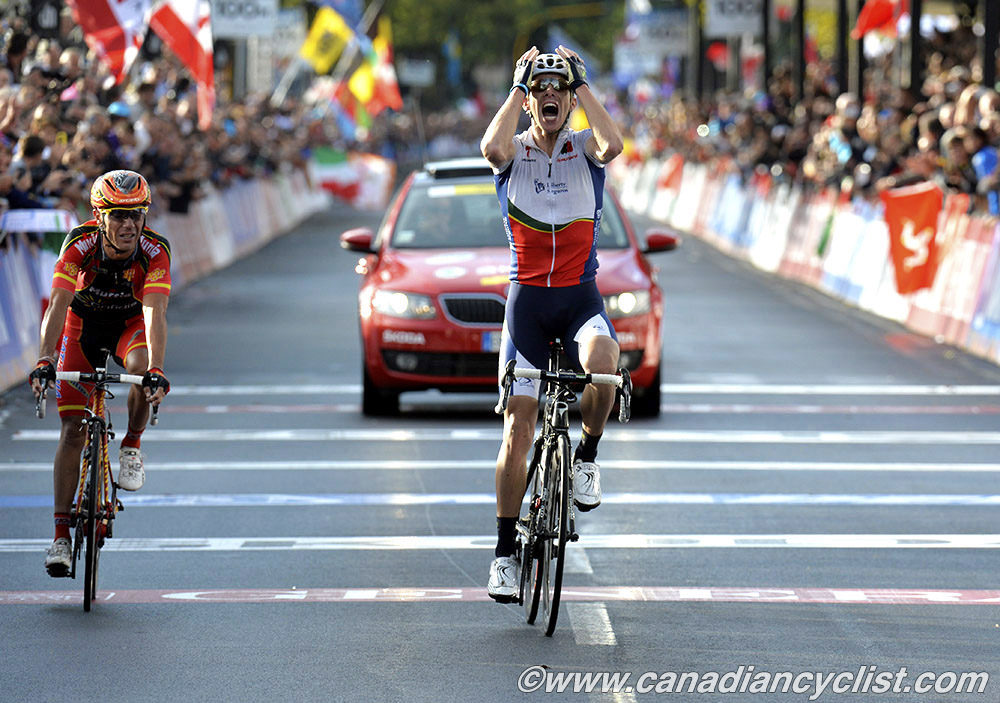 Rui da Costa wins
Photo gallery
On the podium, both da Costa and Rodriguez wept, while Valverde was stone-faced, receiving his fifth world championship medal, none of them gold.

"This was always a big dream of mine," said da Costa, "since I was a child, to wear this jersey. Today I realised a dream, and in a way won the lottery. This jersey means a great deal to me and I wanted it more than anything else in my career. I think I still can't believe that I am the World Champion but I will do everything I can to honour this jersey."
Note: Rui da Costa will join Team Lampre-Merida for 2014.